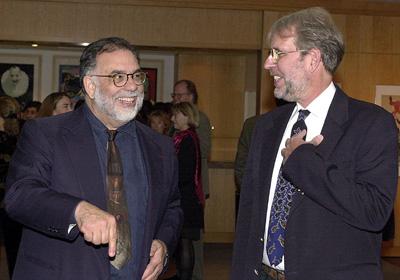 Walter Murch started his career as a sound editor on "Godfather III." He is right with Francis Ford Coppola, left, at an Oscars party.
© Lucy Nicholson/AFP/Getty Images

­If you’re eager to become a film editor, you probably need to slow down and start with some schooling to learn about the industry and the technology used in film editing. Beyond that, you’ll need to gain experience working in the movie industry. And if you want to become an established feature film editor, you’ll need to start in a more modest film-editing job and work your way up.

Movie editors have to know the art, the business and the technology of filmmaking. One way to get the knowledge you’ll need is to attend a two- or four-year college that offers programs focused on the filmmaking industry. There you’ll find classes in other aspects of the business, such as directing, cinematography and movie production, as well as film editing.

Schools also offer the chance to work on student projects and job assistance through placement and internship programs. And many schools provide editing systems, like Avid and Final Cut Pro, and equipment that you can use to become more experienced.

For many years, film editing meant cutting film apart and then taping it back together and threading it onto a Moviola, a machine that had a viewer and could hold multiple reels of film with a viewer. The process of reviewing, cutting and reassembling miles of footage was tiring and time consuming.

Now the process has shifted to digital editing technology using computers and digital systems. The Moviola Co. even offers courses on using these systems. Moving, interchanging and adding sections of footage are easier electronically, as is altering or adding animation or special effects to individual frames.

Being adept at using this technology is an important skill for a film editor. Beyond simply learning today’s technology, you’ll need to keep up with changes. That means continuing taking courses and shifting to new technology throughout your career. Even assistant editors need strong computer skills.

With your education behind you, the next step is paying your dues. That may mean working as an assistant in the film industry during school, or it may mean dues literally -- as in union dues. Hollywood film editors usually are members of the Motion Picture Editors Guild.

The guild may be a place to find an apprenticeship as the first step rung on the editing ladder. It also offers career information on film editing, a magazine, wage information and advice.

Another organization, American Cinema Editors, is an honorary society for film editors, whose members are allowed to list "A.C.E." after their names in film credits. While you'll be years from becoming a member, the society may help you as a beginner through seminars and the student competition that's part of its annual Eddie Awards.

To start, you'll need to build a video resume of your work. You'll also need contacts ­you've made to get a first job. That first job may have nothing to do with editing. You may find yourself a production assistant, an animation-editing assistant or an assistant to an editor.

From there, with contacts, skill and luck, you can work your way up from assistant editor to associate editor and finally film editor. Many film editors build a team of assistants to take from film to film, and directors also like to keep using the same editors. So building relationships will definitely have a positive impact on your career [source: The Princeton Review].

For lots more information about film editors and related topics, see the links below.­