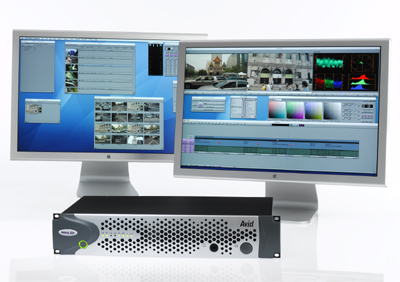 For most professional film and television editors, there's no substitute for an Avid editing system. Avid has been a pioneer in the non-linear editing industry since 1989 when the fledgling Massachusetts company introduced the first version of its Media Composer software. The original Avid system, which included the software, an Apple desktop computer, some external hard drives, monitors and a tape deck, cost between $50,000 and $80,000 [source: Funding Universe].

Nearly 20 years later, Avid is still the industry leader in non-linear computer-based editing systems. From Oscar-winning films to reality TV shows, almost everything is edited on an Avid system. Avid itself won an Oscar in 1998 for Scientific and Technological achievement for the impact that its Media Composer software (then called Film Composer) has had on the film industry [source: Academy of Motion Picture Arts and Sciences].

In recent years, the price has come down on Avid software (the newest version of Media Composer retails at $2,495), which means that serious home users can now access the same high-end tools as the Hollywood pros. Although the Avid interface has a lot in common with other higher end video editing systems -- like Final Cut Pro and Adobe Premiere -- it takes serious training and lots of practice to master the system's hundreds of specialized editing and effects tools.

Professional editors are so loyal to Avid because the company has worked hard to incorporate the suggestions of working editors into every new version of its Avid software and hardware. The result is a continuously evolving system. For example, the latest version of Media Composer software and Avid hardware boxes include tons of improved functionality for working with high-definition (HD) video, something that editors need now more than ever.

So what exactly is non-linear editing? How have computerized editing systems changed the editing profession? What are all the different aspects of an Avid editing system, and what are the latest tools that are shaping the future of film and TV editing? Read on to find out.