Skills Required of a Film Editor 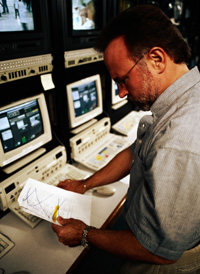 Film editors often rely on director's notes to use when editing a film.
© Ryan McVay/Photodisc/Getty Images

If you don't like long hours, rush assignments or working alone, being a film editor isn't for you. At the same time, if you can't work well with others, are looking for personal artistic acclaim or aren't willing to keep up with changing technology, you'll be happier in another job than movie editor.

But if you like detail work and being part of a major production in the film industry, film editing may be the career for you. If you're interested in becoming an established feature film editor, here are some of the film editor skills you'll need:

­­Even established feature film editors find their skills stretched by the demands of complex movies heavy with visual effects, like the Matrix Trilogy. Zach Staenberg, film editor for the trilogy, won an Oscar for "The Matrix" (1999) and edited all three films in only four years, with "The Matrix Reloaded" and "The Matrix Revolutions" both released in 2003.

He found himself sorting out footage shot at the same time and location for two different films ("Reloaded" and "Revolutions") -- and editing both films simultaneously. To make that happen, he worked with a staff of seven, several focused primarily on special effects.

Staenberg also had to work 440 visual effects shots into "The Matrix," 1,100 into "Reloaded" and 750 into "Revolutions." Every time the editors got a visual effects shot, he told an Editors Guild writer, they had to make changes to the film, ranging from switching a few frames to rearranging the entire sequence. Adapting to that ever-changing workflow was the biggest challenge in editing the trilogy, he said [source: Editors Guild].

Do you think you have the skills and the interest to be a film editor? Keep reading to find out the type of training and experience you'll need.