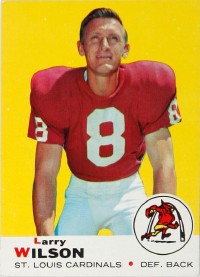 Larry Wilson, defensive back for the St. Louis Cardinals, was known as "the toughest player in the NFL." See more pictures of football stars.

As a safety for the St. Louis Cardinals, Larry Wilson helped his team defeat the Pittsburgh Steelers 21-17 on November 7, 1965. This win allowed the Cardinals to remain in contention for the league's Eastern Conference title.

Wilson set the tone of the game when, early in the first quarter, he burst through the Steelers' offensive line and batted down a Bill Nelson pass.

As the ball fell aimlessly toward the ground, Wilson scooped it out of mid-air and rambled 34 yards to the Pittsburgh 3. The Cardinals scored on the next play.

While big plays were nothing new for the Cardinals' All-Pro safety, what made this one different was that Wilson was playing with casts on both hands, having a week earlier sustained a broken left hand and a broken finger on his right hand.

Wilson (born 1938) rightfully earned the reputation of being the "toughest player in the NFL." The Cardinals' innovative safety blitz was designed around the 6'0", 190-pound defensive back.

"I had to wait for the right player to execute it," explained Chuck Drulis, the Cardinals' defensive coordinator and blitz architect.

"He had to be quick, he had to be a hard tackler, and he had to have a lot of guts because he could be belted really hard by those big offensive linemen if anything went wrong. Larry had all those attributes."

A seventh-round draft choice out of Utah in 1960, Wilson had serious doubts that he would even make the Cardinal's team. Not only did the future Hall of Famer make the team, but he started as a rookie and made the first of his eight Pro Bowl appearances in 1962.

In addition to being a deadly effective blitzer, Wilson was also recognized as an outstanding coverage man. He led the league in interceptions in 1966 with 10, including a string of seven games in which he had at least one pick. He finished his career with a club-record 52 interceptions.

According to Steelers Hall of Fame quarterback Bobby Layne, Wilson "may have been the toughest guy, pound-for-pound, who ever played this game."