A Comics Life For Me 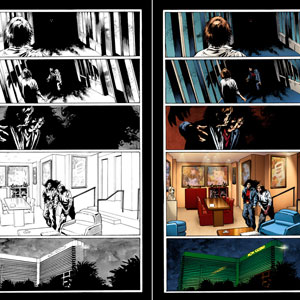 Laura Martin says the color schemes in this art, from "The Stand: Hardcases," are based on photos of the MGM Grand. She made subtle changes, darkening the hallway and making the penthouse warmer and richer, to play off the emotions of the characters.
Courtesy of DC Comics

Mainstream comics publishing is demanding, deadline-driven work. Brian Stelfreeze, who has drawn dozens of cover illustrations for DC Comics, Marvel and other clients, says that in this environment, teamwork is paramount, although he found the idea of collaboration a little strange at first.

"I started my career as a commercial illustrator, so the process of an assignment divided into three artists seemed quite foreign to me." Now, though, he's sold on the teamwork approach. "Comics depend on the synergy of specialists and creating a work greater than the sum of its parts, but I find it often only as strong as its weakest link," he said.

You may wonder how a world-class artist winds up in comic books. The road to comics success is not necessarily a straight one. Like many comic artists, Stelfreeze has a patchwork background. He started by drawing editorial cartoons in high school, went on to airbrush t-shirts in Myrtle Beach and jettisoned art school for a job as a commercial illustrator. Then he fell back in love with comics.

"I had always wanted to draw comics as a kid, so I thought I'd try it just once," he said. "Fateful last words spoken by many an alcoholic, junkie, (and) vampire."

Laura Martin got bitten by the comics bug at university. She says, "I read comics as a child and in my early teens, but I'd largely dismissed them until I was in college. At the University of Central Florida, my major was graphic design and my minor was art history. While I was going to school there, I worked nights at Kinko's, where several of the employees were comics fans. Their enthusiasm got me excited about comics again."

Martin says that her coloring work is 99% digital, but that style and techniques vary depending on the artist. "Comic coloring is part of a collaboration; we're not creating new art ourselves. Our job is to enhance the black and white artwork drawn by a penciler and inker, which is drawn based on a story written by a writer." That means individuals aren't in complete creative control -- their work is dictated by the story's setting and mood, among other factors. Again, efficiency is key. "Many pros color over sixty pages per month. So we have techniques and styles in place to maximize productivity while not sacrificing storytelling or style."

Reading this description of a comics workflow might make you think the whole process sounds vaguely cinematic. On the next page, you'll see how the work these artists do really does wind up on the big screen.