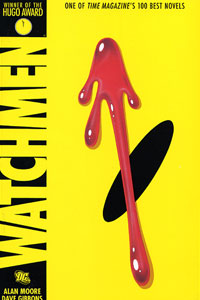 Watchmen: Not your average comic book.
Courtesy of DC Comics

In the 1970s and 1980s, longer-form comics -- sometimes serious, sometimes funny -- became more common and were sometimes labeled graphic novels. These so-called novels featured complicated subjects such as morality and philosophy, and they introduced conflicted characters and damaged, fallible superheroes.

In some particularly notable works, it became clear that the power and scope of comic art had become a true cultural force. "Watchmen," "Maus" and "The Dark Knight Returns" put on display the kind of nuanced, tour-de-force works that were possible when scholarly writers matched their intellect with equally talented illustrators. Since these titles were released, comic book and graphic novel creators have continued to explore and find success in every genre. To learn more about the evolution of graphic novels (and the term itself), check out our article How Graphic Novels Work.

Independent publishers do sell many comic books. But these days, two long-standing rivals, DC Comics and Marvel, account for about 8 of every 10 comic books sold in the United States [SOURCE: CNN]. Their hit titles, which often benefit from movie adaptations, include "Superman," "X-Men," "The Dark Knight" and "Ironman," among many others.

While the U.S. sequential art medium was experiencing its developmental renaissance, Japan saw a similar rise in comic art. After World War II, especially, the Japanese fell in love with comics and began publishing them en masse. Japanese comics are generally referred to as manga. Manga are a massive cultural spectacle, more popular in Japan than comic books are in America. Manga creators make books that target and grab every section of society and gender, from young children and teens to adults.

Perhaps unsurprisingly, manga are also growing in popularity in the United States. Sometimes manga titles, such as "Fake" and "Death Note," even outsell those made in America. Manga are often simply black-and-white drawings, with only occasional color, and feature stories that appeal not to boys, but to girls. When it comes to manga, girls are the driving market force, and most titles are geared toward their tastes.

These days, in both Japan and America, comic creativity is still high, drawing on the powers of top-notch writers and artists. Keep reading, and you'll see just how these talented artists make their characters and stories leap from the page.