Browse the article How the Batsuit Works 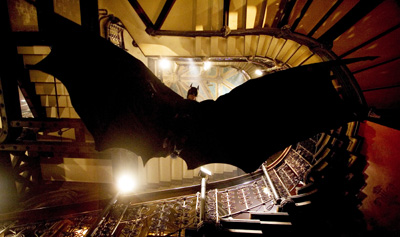 Night in and night out, Batman keeps the streets of Gotham City safe from crime and villainy. One of the most extraordinary things about Batman is this: Despite the fact that he's a superhero, he doesn't actually posses any super powers. Instead of relying on unearthly abilities, Batman uses ingenuity, deception and clever gadgetry to give him an edge over Gotham's criminal element. Nothing instills fear in the hearts of Gotham's wrongdoers more than Batman's menacing appearance, and that appearance is all about the Batsuit.

The Batsuit does a lot more for Batman than make him look scary. On its own, the suit is a pretty impressive piece of technology. The Batsuit combines armor, communications and combat technologies into one state-of-the-art crime-fighting system.

In this article, we'll look at the different components of the Batsuit, explain how they work and see how Batman uses them to keep the streets safe at night.

The base of the Nomax Survival Suit is a neoprene undersuit, much like a SCUBA diver wears. This undersuit basically functions as waterproof, light armor with temperature-regulating elements that maintain the body's temperature and keep muscles from freezing up in the field. There are six pieces of over-armor that attach to the undersuit:

Batman has augmented the over-armor with his custom-designed, scalloped-brass forearm gauntlets (painted matte black, of course). These gauntlets, along with his Kevlar gloves, make Batman's arms a viable defensive or offensive weapon. His gauntlets allow him to protect himself against bladed weapons like swords or knives. The armor and scalloped blades also add extra power and pain to Batman's strikes.

Batman replaced the traditional helmet that accompanies the Nomax Suit with his distinctive cowl, which does more than simply add to his daunting appearance.

Batman's cowl is sculpted from an impact-resistant, graphite-composite exterior. There is also bullet-proof Kevlar plating that shields sections of Batman's head and protects it from small-arms fire. Bundled into the "ears" of the cowl are high-gain microphones and a radio antenna. The radio antenna allows Batman to monitor police and emergency-services radio frequencies so that he can always be "first on the scene."

The microphones in the ears are combined with special earpieces in the cowl that give Batman superior hearing in the field. The microphones can also be used to amplify Batman's voice and broadcast it through a discreet speaker in the suit. This is what gives Batman's voice that distinctive, disembodied and unearthly sound.

Batman's cape was also developed by the Applied Science Division of Wayne Enterprises. Based on a nylon derivative, the special memory fiber, can billow and flow like any fabric -- but when an electric charge is applied to the fiber, it becomes stiff and takes on a distinctive shape. For instance, Batman's cape has been sculpted into a kind of glider than can slow his falls or even allow for short flights.

The real costuming challenge was creating a Batman cape with the right look and movement on screen. To accomplish this, the crew got help from the British Ministry of Defense. Ministry technicians taught the crew a technique that is used on police gear to lower night-vision detection, called electrostatic flocking.

The crew brushed nylon parachute fabric with glue and dropped a very fine, hair-like material onto it. Then an electrostatic charge was run under the fabric. This process gave the cape a seamless look and a distinctive, velvety sheen. The idea was to make the cape in the film look more like what we've seen in the comic book. 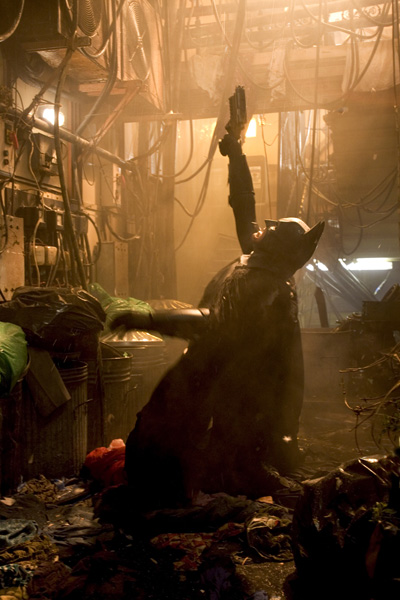 The magnetic grappling gun is just one of the useful gadgets Batman carries on his utility belt.
Courtesy Warner Bros.; Photo: David James

Batman's utility belt is a modified, Wayne Enterprise prototype climbing harness. With an innovative gear-attachment system, Batman can grab and replace anything on the belt quickly and easily.

Batman carries a variety of non-lethal deterrents and other field equipment on his belt for crime fighting. The utility belt features:

Though it's not on his belt, one of Batman's most innovative and effective gadgets is the sonic device he carries in the heel of one of his boots. This device can be used to summon swarms of bats instantly to create mass chaos at any scene. This allows Batman to create hellish diversions or make dramatic escapes.

For more information on the Batsuit, Batman and related topics, check out the links on the next page.