If you've ever been to a circus or a sideshow, you might have seen someone perform a trick known as the human blockhead. It's the one where someone hammers a nail into his nostril. Some performers add extra flair by replacing the nail with other objects like spoons, corkscrews or hand-operated drills. Regardless of the pointed implement used, the trick usually gets a strong reaction from the crowd. It's the kind of act that makes some people cringe and look away, while others watch in fascinated horror.­

When you watch this trick, ­you might draw a few simple conclusions. One is that the performer has desensitized himself to pain, either through the use of painkillers or through years of practice. Another is that the nail is physically penetrating the structure of the performer’s skull. If you also see the performer remove the nail and notice the lack of blood, you might think that he’s simply pounding the nail through a healed-over hole, similar to an ear piercing.

Anatomy and the Human Blockhead

According to the Coney Island Circus Sideshow, performer Melvin Burkhart invented the trick known as the human blockhead. The term comes from the name he used for his act. [Source: Coney Island Circus Sideshow]. It relies on the structure of the human skull. The skull is a collection of 22 bones, most of which are fused together at joints called sutures. These fused bones form a covering that protects your brain. Although much of the skull looks like one solid piece, it's also full of holes and spaces. These include the sinuses, the eye sockets and the foramen magnum, where the brain stem exits the skull.

The physical features in a person's face are the result of the way skin, fat and muscle tissue lie over this bony structure. An exception is the human nose. The external portion of the nose is mostly cartilage and connective tissue covered with skin. Hair and mucous line the nose and protect the interior nasal passageways from dust, debris and other foreign substances.

The external portion of the nose is a little deceptive. Two nostrils appear to lead almost straight up into the nasal passageway. In reality, the nasal cavity, which connects the nose to the throat, leads almost straight back. Its ceiling is approximately even with the top of the nose, just below the eyes. Its floor tends to be almost level with the alar cartilage, which forms the openings for the nostrils.

The nasal cavity isn't entirely smooth and straight. Its walls are made up of several grooves known as conchae. These grooves hold on to moisture when you exhale through your nose, which helps keep your nasal passages from drying out. Mucous membranes line all of these surfaces, providing lubrication and protection.­

In the human blockhead act, the performer taps a nail straight back into this passageway. Sometimes, he has to move the lower edge of his nostril out of the way to reach the nasal cavity. In some performers, this effect is pronounced -- the protruding nail seems to push the edge of the nostril up like a pig's snout.

Learning to guide a nail into this cavity isn't always easy. Next, we'll take a look at some of the obstacles the performer has to overcome, as well as the hazards of the human blockhead.

Reflexes, Sneezes and the Human Blockhead

When you watch someone perform the human blockhead trick, you probably wonder if he is in any pain. After all, a nail is sharp, and the inside of the nose is sensitive. Putting a foreign object deep into your nasal cavity isn't particularly comfortable, and it can be certainly painful when the performer is learning to do the trick. However, another obstacle -- sneezing -- can be harder to overcome.

Sneezing is a largely reflexive act that usually occurs when something irritates your nasal passageways. As with all reflexes, sneezing involves a reflex arc consisting of a receptor, a sensory nerve, an integration center, a motor nerve and an effector. Here's what happens:

It's possible to put off sneezing, ignoring the tickling sensation in your nose. If the sensation passes, you can get away without sneezing. This isn't always possible, though -- sometimes, you simply have to sneeze.

On top of ruining the effect, sneezing while attempting to put a nail into the nasal cavity could be very dangerous. The sharp intake of air before the sneeze could potentially pull the foreign object further into the nasal passageway than the performer intends. The sudden movement of the head could also cause sharp objects to scrape against the interior of the passage. So when learning to perform the human blockhead act, people have to learn to ignore their sneeze reflex. Much like in sword swallowing, this can take a lot of practice.

The sneeze reflex is one of your body's defense mechanisms against bacteria and viruses-- when you sneeze, you forcibly expel particles that could make you sick. In other words, a human blockhead ignores one of the tools the body uses to prevent illness. In addition, the trick requires a person to place a foreign object in very close proximity to his sinuses and throat. This can potentially lead to illnesses, particularly sinus and throat infections. This is especially true when performers work in crowded conditions, like fairs and festivals. The foreign object is also a physical hazard, which has the potential to damage the tissues inside the nose and nasal cavity.

As with sword swallowing, performers who try the human blockhead put themselves at risk in pursuit of entertainment. It's not an activity that you should try at home or without the help of an experienced performer.

To learn more about the human blockhead and related acts, check out the links on the next page.

Sneezing in the Sun

Some people sneeze when they look at bright light or when they walk from a relatively dark room into bright sunlight. This behavior is known as the photic sneeze reflex, and researchers aren't exactly sure what causes it. 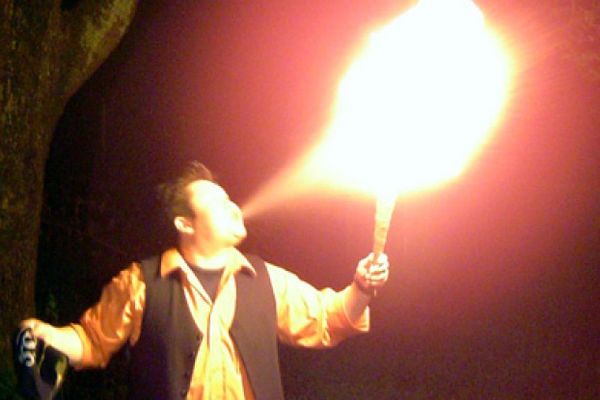 Up Next
Fire breathing
Explore More 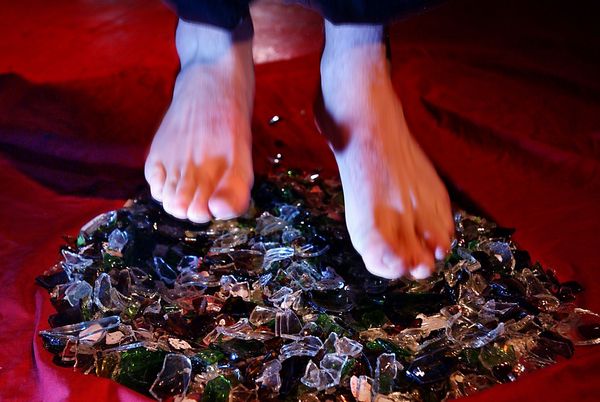 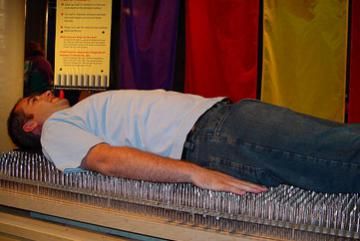