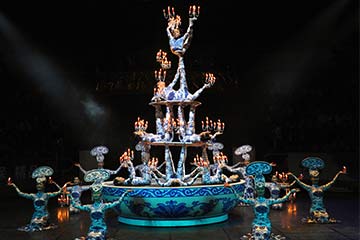 Little is known about the history of hair hanging, but most modern sources believe the art form originated with Chinese performers starting in the early 1900s [source: Barr]. The original hair hangers were mostly men like the tea-sipping Chinese performers that Francisca Vazquez saw in Mexico City.

China has a long and rich history of contortionism, acrobatics and variety acts. Chinese artwork and crafts dating back more than 2,000 years depict lithe acrobats in high-flying action. During the Qin and Han dynasties, roughly 200 B.C.E. to 200 C.E., variety acts were recruited to entertain the royal Chinese court [source: Chinese State Circus].

Plate spinning, stilt walking and contortionism were just a few of the acts that developed into the "show of a hundred tricks," the earliest incarnation of the modern circus [source: Columbia Artists Management Inc.].

The Chinese hair hangers from the 1916 Barnum & Bailey Circus were likely among the first to share their scalp-stretching act with the world. The basic elements of the hair hanging act have changed very little over the past century, except that most (but not all) modern hair hangers are women.

Rarely does a circus school teach hair hanging. One of the few that does, Simply Circus in Massachusetts, limits its students to just 10 minutes in the air after five years of training [source: Caligiuiri]. Most people learn the act from a family member.

Hair hanging is a form of high-wire act. Backstage, the performer's hair is carefully braided around a steel loop. During the act, the loop is attached to a steel cable, by which the performer is lifted 15 to 35 feet (5 to 11 meters) into the air. Assistants in the wings use pulleys and guide cables to control the spinning motion of the performer.

As hair hangers soar in widening circles for five to 20 minutes, they might perform graceful pirouettes, twist in athletic contortions, twirl a hula hoop or even juggle fire [sources: Wadler, Barr]. Joanna Sawicka, a Polish-born hair hanger known by her stage name Anastasia IV, holds a Guinness World Record for lifting the most weight with hair. She has a stage act in which she is suspended upside down from a cable while holding another performer aloft with her hair [source: Cawley].

How in the world do hair hangers get their tresses strong enough to hold their entire body weight? We'll get some grooming tips, next.