How dangerous are knife-throwing acts? 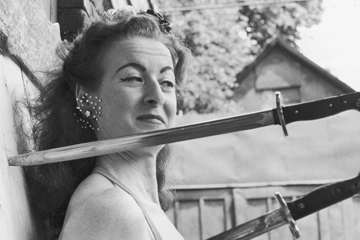 You're standing stock-still against a large, wooden board painted to look like a giant target. Because you're blindfolded, you can't see the person with his back turned toward you. However, based on the sound of his voice, you can estimate he's at a distance of six or seven feet. As you remind yourself not to panic, you feel something pass near your left ear and insert itself -- with a sickening thunk -- into the plank behind you. Any debate about whether knife throwing is dangerous is now closed. You have made up your mind, and the answer is a resounding "yes." This is especially true if you're the knife thrower's assistant.

Knife throwing is a spectator sport that probably originated not long after our hominid predecessors figured out how to sharpen sticks and stones. But it wasn't until the late 1800s that circus-goers witnessed the beginnings of this modern art form.

Of course, an assistant isn't always the target. Knife throwers have impressed audiences for decades by puncturing balloons or hitting wooden targets. It's not until a human is involved that knife throwing becomes known by another name: impalement arts.

The idea behind the impalement arts is to demonstrate marksmanship so keen that it lands as close as possible to the target person's body without actually hitting it. And, to further complicate matters, the assistant is sometimes placed on a rotating "Wheel of Death." This particular variation was most likely introduced to the United States in 1938 by a husband/wife team who were performers at the Ringling Brothers Circus [source: Lammie, Naik].

There are reports of assistants (whom knife throwers often refer to as "targets") being struck by knives and requiring stitches, but these are primarily the result of amateur knife-throwing attempts. Although the sport is a dangerous undertaking, there are things professional knife throwers do to mitigate the risk. If they're well practiced, they rely on a balanced knife that carries equal weight between the blade and the handle. If they are novice knife throwers, a knife that is either blade heavy or handle heavy will give better results -- as long as they hold the lighter end of the knife when they throw. Then, like all good throws, it's important to follow through [source: McKay].

How Shallow Diving Works
Was the Grinch Based on Dr. Seuss?
Flintstones Are Alive and Well and Tackling Social Issues in New Comic