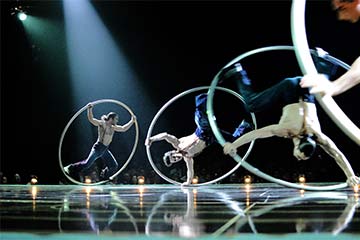 You're at the circus. Not the old-fashioned Barnum & Bailey-style circus with lion tamers and "Ladies and gentlemen!" but the modern version popularized by Cirque de Soleil — darker, more exotic and very, very French.

The lights go down and a single spotlight illuminates a man in the center ring. He's alone, except for a large aluminum ring that he grips with one hand like an oversized hula-hoop. With practiced nonchalance, he rolls the heavy ring on its edge, causing it to trace a slow path around him.

Touching the ring again, he sends it into a slow wobble like a giant toppling coin. With perfect timing, the man steps in, out and around the spinning and wobbling ring in a well-choreographed dance.

Then, with athletic precision, the man steps onto the wheel with both feet and grabs the edges with both hands. For a second, he resembles a rolling image of Leonardo da Vinci's famous "Vitruvian Man."

Using the wheel's own momentum, he begins to execute increasingly difficult spins and inversions, turning graceful somersaults and dizzying pirouettes. For the climax, he raises both feet off the wheel and extends his body outward, appearing to almost be carried away by the wheel while somehow still controlling its every motion.

This dazzling spectacle is called the Cyr wheel, or roue Cyr in French. The 33-pound (15-kilogram) ring is named after its inventor, Daniel Cyr, a Canadian circus performer who showcased his simple innovation in 2003 at the Festival Mondial du Cirque de Demain ("Circus of Tomorrow World Festival") in Paris. Cyr (pronounced "seer") won the silver medal for a stunning routine on his homemade apparatus [source: Cirque Eloize].

In little more than a decade, the Cyr wheel has taken the circus world by storm. Hundreds of amateur and professional acrobats, gymnasts and street performers worldwide now use the wheel in their acts, continually testing the limits of this versatile device.

Like most great ideas, the Cyr wheel wasn't plucked out of thin air. Instead, it was an idea that had existed for nearly a century in various forms before Daniel Cyr gave the simple metal ring — also known as a mono wheel — its latest and greatest incarnation.

Acrobat and Cyr wheel performer Valérie Inertie has assembled a wonderful history of the wheel and its predecessors on her website.

Possibly the first modern performer to incorporate a mono wheel apparatus into her act was the innovative American dancer Doris Humphrey. Promotional photographs from a 1923 piece called "Scherzo Waltz" show Humphrey with one leg raised high while her right hand balances a large metal ring incredibly similar in dimensions to the Cyr wheel.

The next landmark happened in Germany in 1925, when a former railway worker named Otto Feick created the Rhönrad, also known as the German wheel. Feick claims the inspiration for the Rhönrad — which is made from two parallel metal rings and resembles a large hamster wheel — came from a childhood experience of being rolled down a hill in an iron-rimmed barrel.

The Rhönrad enjoyed a period of wild popularity between the two world wars. Feick sold tens of thousands of the double wheels in Germany and demonstrated his invention to appreciative crowds in London and New York City. The Rhönrad was taught in school gym classes and used to train pilots. For the 1936 Berlin Olympic Games, 120 Rhönrad athletes displayed their head-over-heels talents in the opening ceremonies [source: Inertie].

The first mass-produced mono wheel — the closest predecessor of the Cyr wheel — was invented in post-war East Germany by Adalbert von Rekowski in the early 1950s [source: Winkler]. Called the Einreifen, the single-wheel apparatus had straps for attaching your feet to the ring and a handlebar for gripping.

When Daniel Cyr began playing with mono wheel designs in the 1990s, he would have certainly known about the double-ringed German wheel, but probably not the Einreifen, which had long dwindled into obscurity. Cyr claims to have been inspired to create the Cyr wheel after seeing a large hula-hoop and a circular wrought-iron coat rack [source: Inertie].

Cyr's first model was formed from a single piece of rough steel. In later iterations, he switched to aluminum for lightness and added a PVC coating for a smoother spin. Eventually, he came up with a highly portable design that could be broken down into five pieces and reassembled easily with screws [source: Inertie].

Next we'll chronicle the Cyr wheel's rise to fame through its best performers and biggest shows. 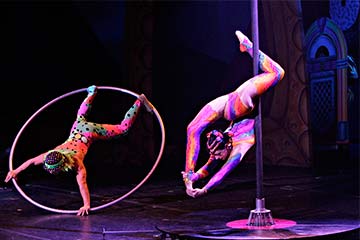 How to Use a Cyr Wheel

The beauty of using a Cyr wheel is that it can be as simple or complex as you wish. The apparatus is exactly the same for both beginners and professionals. With practice and patience, just about anyone can learn how to perform some basic Cyr wheel movements.

The first step is choosing the right size for your Cyr wheel. Most Cyr wheel manufacturers recommend buying a wheel that's roughly 3 inches (8 centimeters) taller than you [source: Coggs]. It's important that you can stand comfortably inside the wheel and that you can easily reach the edges of the wheel with your arms fully extended in the 10 and 2 o'clock position.

Wear loose clothing. Going barefoot or wearing socks work well for indoors, but you probably need sneakers if you're practicing outside on pavement. You'll also want to position the wheel on a non-slippery surface.

The key to getting started on the Cyr wheel is finding your balance. The basic Cyr wheel posture is to stand straight up, arms extended, and hold the wheel slightly forward in front of your body. This "V" shape places the center of gravity right in front of your chest [source: Tribble].

Before you try any spins, try simply standing on the wheel on the balls of your feet and balancing for as long as you can. Once you feel comfortable, try some of these basic starts and spins:

You can find video tutorials for these three basic starts and more advanced moves on instructor Sam Tribble's YouTube channel.

In an interesting collision of past and present, the Cyr wheel has caught on with a fringe sports subculture that's existed since the heyday of the German wheel. Learn more about "wheel gymnastics" on the next page.

Dizziness is often a part of life when learning the Cyr wheel but most people get used to it eventually. Chewing on ginger candy seems to help as well. 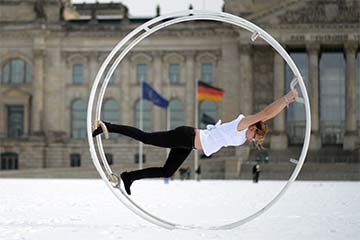