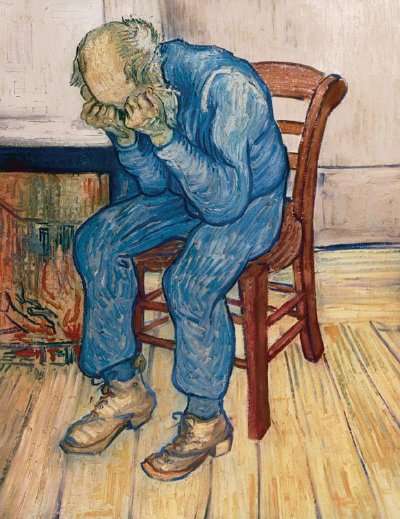 Old Man in Sorrow (On the Threshold of Eternity) is emblematic of Vincent van Gogh's suffering in his final months in Auvers-sur-Oise.

Vincent van Gogh left the asylum in Saint-Rémy on May 17, 1890, and boarded a northbound train to travel to Auvers-sur-Oise, where he lived near the home of the physician Paul Gachet. An amateur artist and enthusiastic collector of contemporary painting, Gachet offered Vincent sympathetic companionship as well as supervisory care. The picturesque village also boasted a long artistic tradition; Honoré Daumier, Camille Corot, and Paul Cézanne had all worked there, and Charles-François Daubigny -- one of the Barbizon painters who had pioneered plein air painting -- had made it his home.

Living in a rented room in an inn near Gachet's residence, Vincent was grateful for the physician's encouragement and support. He began to paint immediately, setting up his easel in Gachet's garden. At first Vincent feared that he would have neither the strength nor the confidence to carry out his painting, but those feelings rapidly disappeared as he worked with his characteristic absorption and productivity. In the weeks from mid-May through the end of June, he painted more than 30 canvases, including scenes of the village, landscapes painted in the fields that surrounded the city, and close studies of ears of wheat and acacia branches.

In particular van Gogh was obsessed with the wheat fields outside the town. In a letter to his mother and his sister Wil, he declared that he was completely absorbed in the subject; in the same letter he informed them that his calm mood was in perfect accord with the placid fields. But his description of his new paintings to his brother Theo struck a different tone. He wrote: "There are vast fields of wheat under troubled skies, and I did not need to go out of my way to express sadness and extreme loneliness." These words took on a new poignancy when, on July 27, Vincent shot himself in the wheat fields where he had set up his easel.

Follow the links below to learn more about some of Vincent van Gogh's final paintings.

Irises: Vincent van Gogh's Irises represents the artist's lifelong interest in exploring the possibilities of color. Read about Irises, which van Gogh painted while still in the asylum of Saint-Rémy.

Farm near Auvers: Vincent van Gogh's Farm near Auvers is one of several works van Gogh painted of the countryside surrounding Auvers-sur-Oise. Learn about Farm Near Auvers, which some believe remained unfinished at the time of the great artist's death.

The first painting we'll look at portrays a wheat field, one of the enduring symbols of Vincent van Gogh's time in Auvers-sur-Oise.