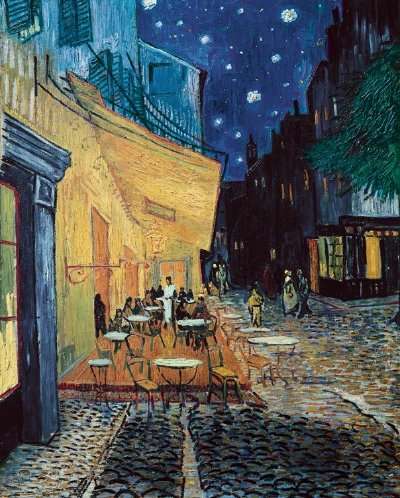 Vincent van Gogh's years in Paris had been invigorating, but he was now feeling physically drained and emotionally overstimulated. He longed for a community of like-minded painters who would live and work together in harmony with nature and one another, as he imagined artists lived in Japan. To pursue these ideals, van Gogh decided to move to Arles, in the south of France.

Van Gogh arrived in Arles during the middle of a heavy snowstorm late in February 1888. Although spring seemed distant, he noticed an appealing and subtle difference in the color of the landscape from that of the north. There were yellow rocks and red soil, as well as mountains beyond the village that appeared lilac in the chilly air.

After years of painting bouquets in Paris, van Gogh was now inspired by the spectacle of the flowering fruit trees in the early spring. He set up his easel in the orchards, working swiftly to capture the ephemeral beauty before the burgeoning fruit replaced the flowers. He used pure pigment to get the freshest tones and applied it to his canvas with a light touch to echo the pale, translucent petals flickering on the branches.

Van Gogh abandoned the self-conscious approach to painting he had practiced in Paris and followed his own instincts. He worked freely over the surface of his paintings, applying thick paint on some areas while allowing bare patches of raw canvas to remain exposed. By mid-May, van Gogh had completed at least 20 canvases.

Horizontal bands of golden wheat stir in the foreground of Vincent van Gogh's The Harvest. Learn about this painting in the next section.