End of the Dead Ball Era 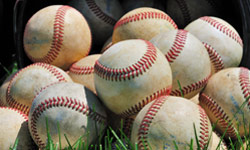 Who knew that the yarn on a ball could make it go further and faster?
Bruce Lighty/Getty Images

In 1919, Babe Ruth shocked the baseball world by becoming the first player to hit 29 home runs in a season. Prior to Ruth's explosion at the plate, most batters had employed a slower, more strategic swing to produce singles and doubles that would advance the runners. Ruth famously swung for the fences every time and had the stats to prove it, despite the wretched condition of the game ball in 1919.

What does the game ball have to do with it? The years spanning 1900 to 1919 are known in baseball history circles as the "Dead Ball" era. Why was the ball "dead?" Some historians point to the materials used to construct the ball itself. The rubber core of the ball was replaced with cork in 1910, and Australian yarn replaced American yarn in 1920. But those changes were unlikely to produce the sort of home run barrage that broke out in 1920 [source: Rader].

Instead, it was a rule change that ended the Dead Ball era. In February 1920, the rules were changed to officially ban all "doctored" pitches, including spit balls, scuffed balls, sanded balls and any other trick pitch. Imagine the condition of a ball that had been manhandled and literally licked by a half-dozen pitchers over the course of a game. And remember, back in the Dead Ball era, it was customary to use the same ball all game long. Even foul balls to the bleachers were routinely tossed back into play [source: Wright].

Not only were balls cleaner, livelier and easier to see after the 1920 rule change, but there were more of them. In August 1920, Cleveland Indian Ray Chapman was struck in the head by a pitch that he never saw. He lost the dark, soggy ball after it left Yankee pitcher Carl Mays' hand. The impact fractured Chapman's skull and he died the next day [source: Wright]. Chapman's death -- still the only of its kind in Major League Baseball history -- prompted a new edict for umpires to frequently replace the game ball with a new, clean ball.

Pitchers complained about the difficulty of gripping the fresh balls, but batters relished the change. Inspired by the big swings of the Babe and armed with cleaner, livelier balls, strikeouts hit an all-time low in the 1920s, eight batters achieved a .400 batting average, and home runs soared. Ruth himself hit 54 in the 1920 season and 59 in 1922 [source: Baseball Almanac]. The Lively Ball era had begun.

Under current MLB rules, the home team must provide the umpire with a ready reserve of at least 12 unused game balls with the glossy sheen rubbed off. The umpire must keep two alternate balls on his person at all times, and balls are replaced when the ball is batted into the stands, the ball becomes "discolored," or the pitcher requests a new one [source: MLB.com].