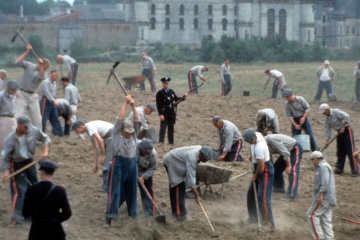 The aerial shot of Shawshank Prison -- a character in its own right -- is a sweeping establishing shot that introduces viewers to the prison where most of "The Shawshank Redemption" takes place.
Castle Rock Entertainment/Moviepix/Getty Images

Any time a film opens with a view of some iconic landmark, you're looking at an establishing shot. Sweeping deserts and great pyramids take the audience to Egypt. The Eiffel Tower clues you in that the following scene, or even the entire movie, takes place in Paris. Views of Central Park, the National Mall or even a streetcar are all designed to establish the movie's setting in New York, Washington or San Francisco.

The list of establishing shots in well-known films is virtually endless, which indicates the popularity and importance of the shot and its role in modern film.