­ In December 2006, news agencies reported that American and British troops in Iraq had developed an inventive method for finding traps. By spraying Silly String down halls or through doors, people could see otherwise invisible tripwires. Since these wires could trigger explosive devices, Silly String quickly gained a reputation for being a lifesaver.

The trap-detection story piqued the HowStuffWorks staff's curiosity about Silly String itself. What does it take to make strands of material that are cohesive enough to loop over thin wires without breaking, but light enough not to spring the traps? How can a relatively small aerosol can filled with liquid produce hundreds of feet of a stringy solid? Why can the strands fly as far as they do? And who invented it in the first place?

A little research revealed virtually identical answers all over the Web. Sites asserted that Silly String was a complete enigma. Other than its manufacturer, no one knew what it was made of or how it worked. Some even claimed that the Silly String mystery was too tough for scientists to crack and that chemists could offer only their best guesses. But one fact remained fairly consistent -- according to news articles and Web sites, Julius Samann introduced the product in 1969.

Silly String is strong enough to rest on a thin wire without breaking but light enough not to weigh the wire down.

A 1972 United States Patent for a "foamable resinous composition" disagrees with all of that. It describes an aerosol liquid that becomes a slightly tacky string when sprayed -- Silly String. According to the patent, the product's inventors are Robert P. Cox and Leonard A. Fish. The United States Patent and Trademark Office (USPTO) assigned the patent not to Julius Samann, but to Wham-O Manufacturing Company, maker of the Hula Hoop and the Frisbee. The Wham-O Web site agrees with the patent; according to its FAQ, it introduced Silly String in 1972.

Samann, on the other hand, appears nowhere on the patent. In fact, a search of all U.S. patents issued since 1790 reveals that Samann's name appears on exactly two patents. Both describe a "container for volatile substances." The volatile substances are perfumes; the containers are cardboard cut-outs. In one patent, the cut-out is shaped like a fir tree. In the other, it's the silhouette of a woman who appears to be in a state of undress.

In spite of the Internet lore, Silly String is not an impenetrable mystery. Everything about it, from the way it flies across the room to its knack for clinging to surfaces, comes from the interactions between its ingredients. We'll look at how ordinary chemicals become extraordinary liquid string in the next section.

The Chemistry of Silly String 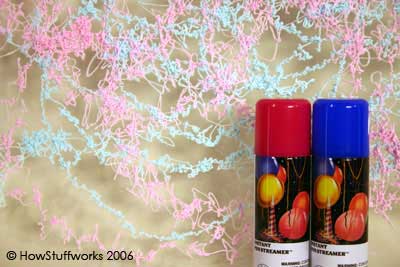 Silly String is sticky enough to adhere to vertical surfaces.

Whether you're spraying Silly String in a hunt for tripwires, at a celebration or just for fun, you're probably not thinking too much about its physical properties. But those properties are responsible for everything it can do, and taking a moment to define them can help you understand how the aerosol string works.

Silly String starts as a liquid inside the can and becomes continuous string outside of the can. The string is lightweight and slightly adhesive; it can stick to walls, clothing and other surfaces. It's also cohesive; unless you physically pull it apart, it holds itself together in one long piece. Most importantly, its adhesive strength is less than its cohesive strength. In other words, it takes less force to pull a strand off the wall than it takes to pull it apart. That's why you can usually grab Silly String after it dries, and the bulk of it will come off a surface in one big tangle. Exceptions are if you spray it at very close range, onto highly textured surfaces or onto surfaces that interact with its ingredients, like vinyl. In those cases, cleanup can require substantially more effort.

All of these properties come from Silly String's ingredients and the way they interact when extruded through the nozzle of a normal aerosol can. They create foam surrounded by a sturdy skin. The foam is light, and the skin is flexible and tacky. The foam and its skin come from three primary ingredients:

Silly String's characteristic texture and shape come from the proportions of these ingredients. Resin is the string's plastic component -- it creates the physical framework for the strands. With too much of it, the liquid couldn't foam very much and the final product would have a texture more like caulk. With too little resin, the strands would be too fragile to hold themselves together.

Neither resin nor surfactant is Silly String's primary ingredient, though. The plastic resin is only 10 or 15 percent of the mix, and the surfactant is less than five percent. By a substantial margin, most of what's in the can is propellant. The propellant causes the reaction between the resin and the surfactant. It's a lot like running a jet of hot water into a sink with dishwashing liquid -- the agitation from the jet of water and the presence of the surfactant combine to make foam.

Inside a liquid propellant aerosol can. Most Silly String formulations do not require a ball bearing to help mix the product because the ingredients mix well on their own.

Without the propellant and the aerosol can, Silly String would have no foam. At normal air pressure, the propellant in Silly String would be a gas. The high pressure inside the can, however, keeps it in its liquid state, and all of the other ingredients are dissolved in it. When you press the nozzle, a valve opens inside the can, giving the highly compressed liquid a chance to escape. Liquid rapidly moves up the tube inside the can, traveling from the high-pressure environment inside to the lower-pressure environment outside. Outside of the confines of the can, the liquid propellant quickly becomes a gas, causing the remaining ingredients to foam. You can read more about aerosol cans in How Aerosol Cans Work.

The movement of propellant is central to the physical qualities of Silly String. Unfortunately, it has also lead to safety and environmental concerns. We'll look at those in the next section.

Other ingredients can adjust the strength, stickiness, weight, color and flammability of Silly String. These include:

The Environmental Impact of Silly String 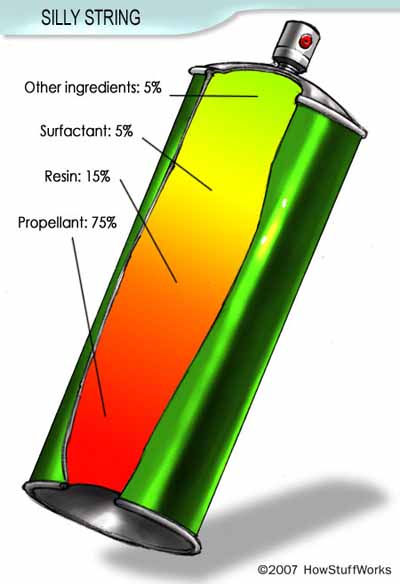 The liquid inside a can of Silly String is mostly propellant.

About 75 percent of the liquid inside of a can of Silly String is propellant. You release this propellant into the air when you press down on the nozzle. Considering that its original propellant was an ozone-depleting substance, it's no surprise that it got the attention of the United States Environmental Protection Agency (EPA) and other regulatory agencies. Many regulations governing ozone-depleting substances issued in the 1970s and 1980s specifically reference Silly String and prohibit its use.

Today, CFCs and hydrochlorofluorocarbons (HCFCs) are banned for use in non-essential applications. For this reason, Silly String and other aerosol products use other propellants. That doesn't mean all Silly String is safe for the environment, though. In 1989, regulatory agencies discovered banned substances in Silly String sold in Woolworths in the United Kingdom. Authorities also discovered CFC-containing spray string in Canada in 2002.

In September of 2006, the EPA learned that five American companies were selling spray string that contained banned HCFCs. The cans had all been imported from China and Taiwan, and authorities believe that most of their ozone-depleting compounds had already been released into the atmosphere before anyone realized anything was amiss. Once the EPA discovered the banned substances, the agency confiscated the remaining cans and incinerated them using a procedure that destroyed the HCFCs.

Its large proportion of propellant can also give Silly String two seemingly opposite hazards. Some propellants are flammable, and others become so cold when leaving the container that they can freeze a person's skin. Most can labels include warnings about whether the string inside requires specific precautions, and many specify to avoid heat and open flames. But some formulations of the product have been dangerous enough to cause widespread concern. For example, in 1990, the United States Consumer Product Safety Commission (CPSC) issued a recall for a variety of spray string that used a highly flammable propellant.

Some municipal authorities are also worried about Silly String for a very practical reason. Sprayed string can make a mess. Several cities have banned the use of Silly String during celebrations, at parades and on holidays like Halloween. In addition to being hard to remove from concrete and brick, the strands are essentially sticky plastic, so they can clog storm drains and take up space in landfills.

Silly String's long-lasting popularity makes it unlikely that safety or environmental concerns will cause it to disappear from shelves anytime soon. To learn more about aerosols, Silly String and related topics, check out the links on the next page.