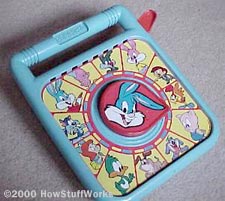 Just about every kid in the United States has played with a See 'n Say®. These toys play a selection of sounds when you pull the string (or, on the modern ones, pull a lever).

If, for instance, you point the dial at the cow and pull the string, the toy says, "The cow says Moo." See 'n Says have been around forever; they use no batteries and they are nearly indestructible -- I've seen See 'n Says submerged in bathtubs, thrown down the steps, dropped onto concrete patios...and they work fine afterwards!

Have you ever wondered how one of these toys works? How can it make sound without a battery, and how can it have 26 different phrases stored inside? In this article, we will solve the mystery of the See 'n Say!

Thomas Edison is credited with creating the first device for recording and playing back sounds in 1877. His approach used a very simple mechanism to store an analog wave mechanically. In Edison's original phonograph, a diaphragm directly controlled a needle, and the needle scratched an analog signal onto a tinfoil cylinder:

This system was improved by Emil Berliner in 1887 to produce the gramophone, which is also a purely mechanical device that uses a needle and diaphragm. The gramophone's major improvement was the use of flat records with a spiral groove, making mass production of the records easy.

Inside a See 'n Say 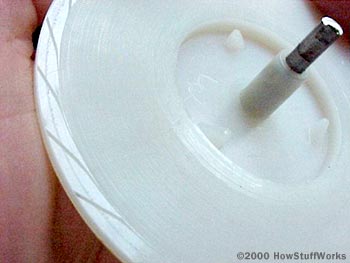 The heart of a See 'n Say is a plastic disk that is very similar to a gramophone record. A track containing the sound wave for each of the See 'n Say's sounds is embossed on the disk. A typical See 'n Say has between 10 and 26 sounds, and all of these sounds are stored in concentric tracks:

On the edge of the disk you can see the starting points for the different concentric tracks.

Sound reproduction is extremely simple. A metal needle rides in one of the grooves and transmits the vibrations embossed in the groove directly to a plastic cone speaker:

The needle is embedded in the T-shaped piece of plastic. The needle picks up the vibration pattern embedded in the plastic disk and transmits it to the T, which transmits it to the cone through the red piece of plastic that forms the tip of the cone. What you are hearing when a See 'n Say speaks is the purely mechanical vibration of that plastic cone!

When you pull the cord, it lifts the needle and pulls it back to the outer edge of the disk. Pulling the string also winds the brass spring, and the energy in the spring is what turns the disk to play the sounds.

The only other part inside a See 'n Say is an incredibly nice governor that controls the disk's speed when it rotates. In this picture you can see a band wrapped around the disk and the governor's shaft:

The yellow governor can be seen inside a cylinder molded into the blue plastic.

The governor itself is made of two spring-loaded weights, as shown in the following shots:

When the disk spins too quickly, the weights fly outward and apply pressure to the inside of the cylinder, slowing the disk down. In equilibrium, the governor keeps the disk spinning at exactly the right speed!

And that's it! A See 'n Say is really that simple: embossed disk + metal needle + plastic cone speaker = sounds. The string winds the spring, the spring turns the disk and the governor keeps the disk from spinning too quickly. You can now see why, even after a bath, the See n' Say will keep on working.

The trend today is toward battery-operated toys with embedded microprocessors to produce the sounds (read, for example, about the singing fish). However, the classic See n' Say is a classic because it takes 19th century technology and creates an indestructible toy from it!

How Umpires Work
How Sweeps Week Works
Did Best Supporting Actress go to the wrong person in 1993?