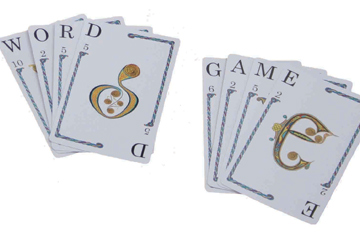 The calligraphy on the cards was inspired by Celtic works like "The Book of Kells," so you could say the monks were Quiddlers.
Cards and game © 1998 Cannei, LLC. All rights reserved. QUIDDLER® and all associated logos and taglines are registered trademarks of Cannei, LLC. Used with permission from Set Enterprises, Inc.

You're probably wondering: What in the world is a Quiddler? According to some definitions, it's a seldom-used term for someone who wastes time doing silly things, or a dawdler (although dawdling certainly isn't encouraged in the game) [source: Webster's].) The game's Web site, on the other hand, defines a Quiddler as a person who "spends a great deal of time on very small details" [source: SETGAME]. This definition makes a lot more sense, given how sophisticated a word game it can be.

QUIDDLER® is a cross between Scrabble and the card game gin rummy. Using a deck of cards marked with single letters (and a few two-letter combos, like QU and ER), players are tasked with creating words from the letters in their hand. (Each card has a point value, and the person with the highest number of points wins.)

We'll get more into the rules of the game in the next few pages, but suffice it to say that QUIDDLER is a game of both word savvy and strategy. Don't be fooled: The person with the largest vocabulary isn't always going to win. The game is even billed as a "short word game," and it's those small words that can curry a lot of points. In fact, the game is cited time and again as a great family game, where both kids and adults have a shot at winning.

Speaking of winning, QUIDDLER has nabbed its fair share of awards and accolades: the Mensa Select award, an Educational Clearinghouse A+ award and a Toy Directory Monthly Classic Game award, among others.

And here's a curious fact: A newspaper search for the word "Quiddler" turns up in a fairly surprising number of obituaries. No, these aren't people who suffered mortal injuries after a particularly raucous game -- rather, it's mentioned quite often as a game people were passionate about in life.

Now who can deny that advertisement? Let's play our hand on the next page and find out a little more about how this game is played.