Browse the article How the Physics of Football Works 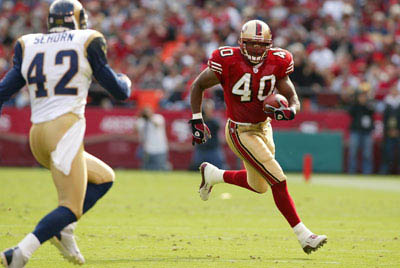 ­When you throw a football across the yard to your friend, you are using physics. You make adjustments for all the factors, such as distance, wind and the weight of the ball. The farther away your friend is, the harder you have to throw the ball, or the steeper the angle of your throw. This adjustment is done in your head, and it's physics -- you just don't call it that because it comes so naturally.

Physics is the branch of science that deals with the physical world. The branch of physics that is most relevant to football is mechanics, the study of motion and its causes. We will look at three broad categories of motion as they apply to the game:

Watching a weekend football game could be teaching you something other than who threw the most passes or gained the most yards. Football provides some great examples of the basic concepts of physics -- it's present in the flight of the ball, the motion of the players and the force of the tackles. In this article, we'll look at how physics applies to the game of football.

The angle of a kick helps determine how far it will travel.

When the football travels through the air, it always follows a curved, or parabolic, path because the movement of the ball in the vertical direction is influenced by the force of gravity. As the ball travels up, gravity slows it down until it stops briefly at its peak height; the ball then comes down, and gravity accelerates it until it hits the ground. This is the path of any object that is launched or thrown (football, arrow, ballistic missile) and is called projectile motion. To learn about projectile motion as it applies to football, let's examine a punt (Figure 1). When a punter kicks a football, he can control three factors:

The rotation of the ball -- spiral or end-over-end -- will influence how the ball slows down in flight, because the ball is affected by air drag. A spiraling kick will have less air drag, will not slow down as much and will be able to stay in the air longer and go farther than an end-over-end kick. The velocity of the ball and the angle of the kick are the major factors that determine:

If you are not interested in the details of calculating the hang-time, peak height and range of a punt, click here to skip the following page.

Talking Physics
Football by the Numbers

Since physics is a quantitative science, developing some units and measures is a good way to begin to understand the effects of physics on football. Consider these useful numbers and units developed by Dr. David Haase of North Carolina State University:

The parabolic path of a football can be described by these two equations:

To calculate the hang-time (ttotal), peak height (ymax), and maximum range (xmax) of a punt, you must know the initial velocity (V) of the ball off the kicker's foot, and the angle (theta) of the kick.

The velocity must be broken into horizontal (Vx) and vertical (Vy) components according to the following formulas:

The hang-time (ttotal) must be determined by one of these two formulas:

Once you know the hang-time, you can calculate maximum range (xmax):

You can calculate the time (t1/2) at which the ball is at its peak height:

And you can calculate the peak height (ymax), using one of these two formulas:

Vertical and horizontal components of velocity:

Runners on the Field

When we look at runners on the field, several aspects can be considered:

When we look at the positions of the backs, both offensive and defensive, we see that they typically line up away from the line of scrimmage on either side of the offensive and defensive linemen. Their positioning allows them room, or time, to accelerate from a state of rest and reach a high speed, to either run with the ball or pursue the ball carrier. Notice that the linebackers have far more room to accelerate than the linemen, and the wide receivers have far more room than the linebackers. So linebackers can reach higher speeds than linemen, and wide receivers can reach the highest speeds of all.

Changing Directions on the Field

Let's look at an example of a running play in which the quarterback hands the ball off to a running back. First, the running back starts from the set position, at rest, and accelerates to full speed (22 mi/h or 9.8 m/s) in 2 s after receiving the ball. His acceleration (a) is:

As he runs with the flow of the play (e.g. to the right), he maintains constant speed (a = 0). When he sees an opening in the line, he plants his foot to stop his motion to the right, changes direction and accelerates upfield into the open. By planting his foot, he applies force to the turf. The force he applies to the turf helps to accomplish two things:

To stop his motion to the right, two forces work together. First, there is the force that he himself applies to the turf when he plants his foot. The second force is the friction between his foot and the turf. Friction is an extremely important factor in runners changing direction. If you have ever seen a football game played in the rain, you have seen what happens to runners when there is little friction to utilize. The following is what happens when a runner tries to change his direction of motion on a wet surface:

The applied force and the frictional force together must stop the motion to the right. Let's assume that he stops in 0.5 s. His acceleration must be:

*The negative sign indicates that the runner is accelerating is in the opposite direction, to the left.

To accelerate upfield, he pushes against the turf and the turf applies an equal and opposite force on him, thereby propelling him upfield. This is an example of Isaac Newton's third law of motion, which states that "for every action there is an equal, but opposite reaction." Again, if he accelerates to full speed in 0.5 s, then the turf applies 1921 N, or about 500 lbs, of force. If no one opposes his motion upfield, he will reach and maintain maximum speed until he either scores or is tackled.

Running in an Open Field

When running in an open field, the player can reach his maximum momentum. Because momentum is the product of mass and velocity, it is possible for players of different masses to have the same momentum. For example, our running back would have the following momentum (p):

For a 125 kg (275 lb) lineman to have the same momentum, he would have to move with a speed of 7.7 m/s. Momentum is important for stopping (tackling, blocking) runners on the field. 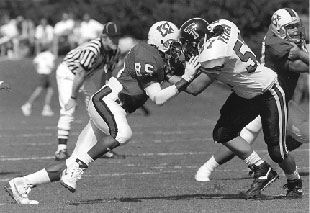 Coaches often tell their players to tackle a runner low. In this way, the runner's feet will be rotated in the air in the direction of the tackle. Let's look at this closely:

A lineman crouches low so that his center of mass is closer to the ground. This makes it hard for an opposing player to move him.

Similarly, coaches often advise linemen to stay low. This brings their center of mass closer to the ground, so an opposing player, no matter how low he goes, can only contact them near their center of mass. This makes it difficult for an opposing player to move them, as they will not rotate upon contact. This technique is critical for a defensive lineman in defending his own goal in the "red" zone, the last 10 yards before the goal line.

We have only touched on some of the applications of physics as they relate to football. Remember, this knowledge appears to be instinctive; Most often, players and coaches don't consciously translate the mechanics of physics into their playing of the sport. But by making that translation, we can understand and appreciate even more just how amazing some of the physical feats on the football field really are. Also, applying physics to football leads to better and safer equipment, affects the rules of the sport, improves athletic performance, and enhances our connection to the game.

For more information on football physics and related topics, check out the links on the next page.

Special thanks to Dr. David Haase, professor of physics and director of The Science House at North Carolina State University in Raleigh, NC.