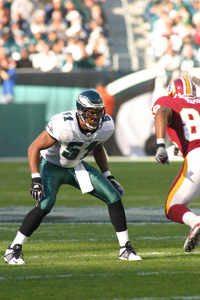 "I'm a big guy, so I start my workouts [in the off-season] earlier than most guys. Some guys will start working out in February; I start working out in the middle of January. I do cardio stuff to keep my weight in place. You know, workouts three or four days a week. I start out with cardio, stretching... Now, for the first time ever, Marvin came in and instituted an off-season workout in Cincinnati. So at the end of March, in Cincinnati, he's doing stuff four days a week with the team."

"With all the pounding our bodies take, you're going to have problems once your career is over. It's just the nature of the job. You just have to hope it's not as bad as some of the players who retire. You can try to keep your body in as great a condition as you can, but eventually, just with all the pounding your body takes, you know there's going to be some problems."

"I call the team doctor at least once a month, because there's something always going on. I've got to have my Ibuprofen just to get through my day sometimes. During the off-season, I detox my system of Ibuprofen, and I try to stay off as much anti-inflammatory medicine as I can. The off-season is the time when a lot of players just detox themselves."

"I'm allergic to shellfish, so that's definitely out of the question, and I stopped eating beef or pork my Freshman year at Georgia. So it's been about eight years since I've had any beef or pork. I'm actually a chicken, fish and turkey guy, which usually keeps me pretty lean. That really helped my game -- helped me reach my optimum, and keeps me pretty healthy.

"During the season, I try to stay away from a lot of fried foods and things. In the off-season, you can get off that program. You can eat chicken wings and that sort of thing every now and then and it won't hurt any."

"This past year, I got into doing martial arts. [It helps with] flexibility. Sometimes, as an athlete, you lift all the weights, and you get all tight. It also helps with instincts, and being able to move in certain positions."

"It takes at least until March for your joints to heal up. It's funny, because we're all big guys, and a lot of the time when guys who are smaller than you come to shake your hand, they feel like they've got to give you a nice squeeze, to show you that they're a man. And that's really not the case, because when you shake most football players' hands, it's usually a real light shake. First of all, we're thinking, we can't be like a monster, and just squeeze the guy's hand, or this lady's hand. And second of all, our hands are so beat up, we can't squeeze anything anyway. It's not until around March that I can shake somebody's hand without grimacing in pain. By the time March gets here, that's when the off-season workout starts with the team. Hopefully, you get a chance to heal up between January and March. You never really get fully healed. You get healed just enough to get back in training camp and go play, but you never really get fully healed."