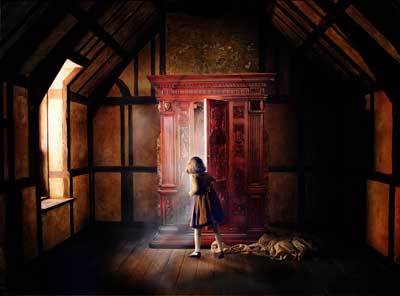 Image courtesy The idea of a magical wardrobe came from a child who stayed with C.S. Lewis during World War II.

A lot of people associate "The Chronicles of Narnia" with the Bible, especially the books of Genesis, Revelations and Gospels of the New Testament. The series has very clear themes of creation, faith, sacrifice, hope, salvation and the triumph of good over evil. While the books certainly draw from Christian faith and teachings, Lewis had many other influences, and he wanted to write books that children and adults would enjoy.

Narnia started to form in Lewis' imagination when he was very young. As a child, he made up a world called Animal-Land, which was full of talking animals. He also wrote stories about noble, talking mice and rabbits who wore armor and fought cats instead of dragons. When he was a teen-ager, images of a queen on a sledge and a faun carrying parcels and an umbrella came into his mind -- both appear in "The Lion, the Witch and the Wardrobe."

During World War II, many children were evacuated from London because of air raids. Some of these children stayed with Lewis at his home in Oxford. One child was fascinated with an old wardrobe he found there, and he asked Lewis what was behind it and whether there was a way out through the back. This real event from Lewis' life, as well as the children themselves, gave him an idea that eventually grew into "The Lion, the Witch and the Wardrobe."

Several prominent characters resemble other people Lewis knew. His mother's death probably influenced "The Magician's Nephew," in which young Digory Kirke asks Aslan to save his own dying mother. Digory grows up to be Professor Kirke, the Pevensie children's host in "The Lion, the Witch and the Wardrobe." Much like Lewis' private tutor, the Professor uses logic and compassion when he talks to the children about the magic wardrobe and their time in Narnia. Lewis also used his very pessimistic gardener as an inspiration for the low-spirited Puddleglum the Marsh-wiggle in "The Silver Chair." Image courtesy HowStuffWorks ShopperLewis drew inspiration for Narnia from a variety of children's books,including those by E. Nesbit, Hans Christian Anderson, Lewis Carroll and Beatrix Potter.Lewis was an avid reader as a child, and many of his favorite books eventually influenced the tone and characters of "The Chronicles of Narnia." These include: Beatrix Potter's talking animals Hans Christian Anderson's Snow Queen, reflected in the White Witch Frances Hodgson Burnett's "The Secret Garden" Lewis Carroll's "Alice's Adventures in Wonderland" and "Through the Looking-Glass" George MacDonald's "The Princess and the Goblin" Rider Haggard's King Solomon's Mines E. Nesbit's books for children, especially the Bastable books and the story "The Aunt and Amabel" and its magical train station called "Bigwardrobeinspareroom" Greek, Irish and Norse mythology Plato's "The Cave" The literary works of Edmund Spenser, John Milton and Dante Alighieri All these influences helped Lewis create a world that came alive in the minds of its viewers. Fans have also watched adaptations of several of the books on television. We'll look at these adaptations and the latest film adaptation next. Critics of Narnia and Are the Chronicles an Allegory?Some vocal critics, including Philip Pullman, author of the children's book series "His Dark Materials," accuse "The Chronicles of Narnia" of racism and sexism. They suggest that the Calormenes, generally enemies of Narnia who have dark skin, wear turbans, live in the desert and worship a different god, represent Muslims. Critics also raise questions about events in The Last Battle, which suggest that earlier books' refrain of "Once a King in Narnia, always a King in Narnia" does not apply to Narnia's queens and that boys are forgiven for worse offenses than girls. Some people argue whether to read "The Chronicles of Narnia" because of or in spite of its allegorical content. But Lewis didn't set out to write an allegory. At first, he intended to write a simple children's story -- the Biblical elements appeared as he wrote. He was halfway through "The Lion, the Witch and the Wardrobe" when he dreamed about a lion and created the character of Aslan, who eventually became a representation of Jesus [ref].