The World of Narnia 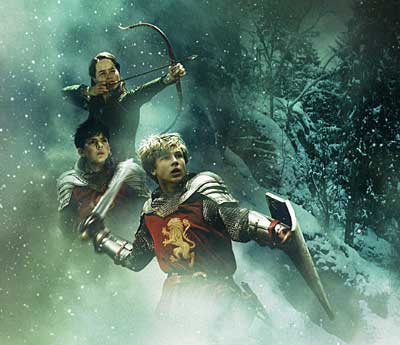 Edmund, Susan and Peter Pevensie as shown in the 2005 film "The Lion, the Witch and the Wardrobe."
Image courtesy

Narnia is a creation of the great lion Aslan, who sings it into existence as a reflection of his own world in "The Magician's Nephew." Narnia has kings and queens, wicked witches, magic and talking animals that live in furnished houses and behave like people. It's a cool, forested land, and after the death of the White Witch and the end of the Long Winter, its climate becomes mild and temperate.

Although Aslan is certainly the most powerful being within Narnia, he is not exactly its ruler. The kings and queens of Narnia are Sons of Adam and Daughters of Eve -- that is, humans. All humans in Narnia either come directly from our world or are descended from people from our world. Children find their way there with magic rings and through doorways, wardrobes and paintings. Narnians and Aslan himself have also used magic to summon children.

Time works differently in Narnia -- children who visit can return a year later to find that hundreds of Narnian years have passed. Or, a thousand Narnian years can pass while only forty years pass in our world. In "The Lion, the Witch and the Wardrobe," the Pevensie children grow up in Narnia, but they become children again when they return home.

Narnia itself is one nation-state within a continent, and from west to east it stretches from the lamppost in the Lantern Waste to the seaside castle of Cair Paravel. Narnia's neighbors are:

You can download a map of Narnia from NarniaWeb.com.

Image courtesy The great lion Aslan as shown in the 2005 film "The Lion, the Witch and the Wardrobe."

Most of Narnia's inhabitants are animals. After creating Narnia, Aslan selected two representatives from many animal species and made them into Talking Beasts. Small animals, like rabbits, got a little larger, and large animals, like elephants, got a little smaller. Aslan charged the Talking Beasts with keeping order in Narnia and watching over the Dumb Beasts. Mice, the only animals to learn to speak after the world's creation, learned to speak after chewing through ropes that bound Aslan in "The Lion, the Witch and the Wardrobe."

In addition to animals, a variety of mythical creatures live in Narnia, including unicorns, giants, dragons, dwarves, dryads, centaurs and fauns. Many of these creatures behave as they do in myths. Others, particularly centaurs and fauns, are far more noble and well-behaved in Narnia.

Next, we'll look at the inspiration behind this world.

Reading the Books of Narnia

The "Chronicles of Narnia" comprises seven books, which document the history of Narnia from beginning to end. In chronological order, they are:

However, Lewis wrote "The Lion, the Witch and the Wardrobe" first, and he didn't initially expect to write a sequel. He wound up completing the books in a completely different order [ref].

A boy named Lawrence wrote to Lewis in 1957 and said that he thought the books should be read chronologically. Lewis agreed, but reading in the order of publication lets you discover the world of Narnia in the same way he did when he was writing. You can read more about the pros and cons of each reading order in this article on the Narnia books.