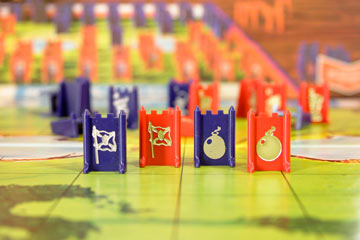 The bombs and flags cannot be moved once the game begins, so take special care with their placement.
Elizabeth Johnston/HowStuffWorks 2012

Take care when you place your pieces initially, as the early game strategies you employ could determine the outcome of the game. You'll want a mix of scouts and powerful pieces in the front rows, closest to the enemy army. Because of their low rank, you can sacrifice scouts as you figure out where your opponent's high-ranking pieces are located. And, by placing powerfully ranked pieces on the front row, you can capture enemy scouts as they breach your territory. Don't, however, send these better-ranking pieces into enemy territory in the beginning of the game; you won't know what they're up against and you'll risk them getting captured or blown up by a bomb.

Beware of bomb placement. You may spend plenty of time considering how your bombs can best affect your enemy, but it's important to remember that they could trap your own troops. Game pieces aren't allowed to jump over other pieces, and if yours don't have room to go around a bomb, they'll be stuck.

Your spy is weak because of its rank, but still valuable because it can take out a marshal. Protect your spy by using a general as a bodyguard. The general's rank is powerful enough to protect your spy by defeating other members of your opponent's army -- except the marshal. But if the marshal does capture your general, you can simply take the marshal out with your spy.

As the game progresses, watch the movements of your opponent's army pieces. How and where they move is a great tip-off as to their rank (scouts move multiple spaces during a single turn, and bombs and flags never move). As you notice these movements, be sure to remember any ranks that are revealed during attacks. You can use this information to make strategic decisions about where and how to attack [source: Hasbro].

Need a great way to bluff your opponent? Group three of your bombs away from your flag; your opponent will assume they're guarding the prize. Or you could leave a mid-ranked piece still among a group of bombs -- if you never move it, your opponent might assume it's a bomb or your flag, and be surprised when it captures their attacking piece. You can also bluff by playing aggressively, chasing down an opponent even if the game piece you're using could easily be taken because of its low rank.