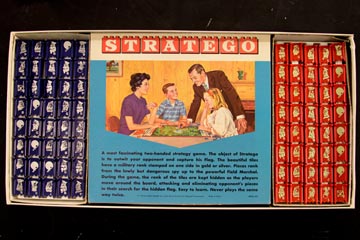 Stratego's design aesthetic has changes since this Milton Bradley set was printed in 1970, but much of the gameplay has remained the same for decades.
Elizabeth Johnston/HowStuffWorks 2012

Stratego's early history was one that spanned multiple continents: the game has many similarities to a French game from the early 1900s. The French patent for an unnamed battlefield game with two opposing armies was filed in 1908 by the game's creator, Hermance Edan. By 1910, a game fitting the same description was being sold by a French game manufacturer as L'Attaque, and included French and British army game pieces [source: Collins]. By the 1920s, L'Attaque was being sold in Great Britain by London-based H.P. Gibsons and Sons [source: Gibsons Games].

Although there has been some dispute about whether L'Attaque inspired Stratego, court papers filed in a 2005 licensing dispute between Hasbro and the inventor of a similar game called Strategy name Jacques Johan Mogendorff as the man who created Stratego at an unspecified time before 1942. By 1943, Mogendorff's family had been confined to a concentration camp in the Netherlands and in 1944 they were moved to a concentration camp in Germany before being freed in 1945.

Mogendorff licensed Stratego to Smeets and Schippers, a Dutch company, in 1946. Then, in 1958, he licensed the game to Hausemann and Hotte for European distribution, and again in 1959 for global distribution. In 1961, the same year that Mogendorff died, Hausemann and Hotte purchased the copyright and U.S. trademark from Mogendorff's heirs and subleased the license to Milton Bradley (which in 1984 became part of the Hasbro corporation) so that the company could manufacture and sell the game in the United States. Later, Milton Bradley also registered a number of copyrights, but these covered ancillary items like the game board and directions.

According to court documents filed in the 2005 lawsuit, Stratego infringed the copyright for Strategy, but the lawsuit was later dismissed. As of the date of dismissal, Hasbro had reportedly sold more than 10 million copies of the game in the United States, and paid more than $5 million in royalties to Hausemann and Hotte [source: Estate of Gunter Sigmund Elkan v. Hasbro].