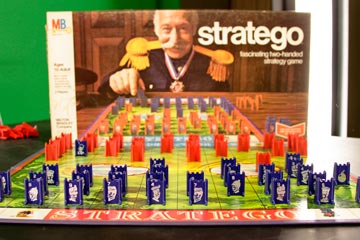 The full Stratego board from a vintage 1970 set, with foil-stamped game pieces.
Elizabeth Johnston/HowStuffWorks 2012

A spy is trapped behind enemy lines. Enemy forces close in as he sneaks up on a marshal, the most powerful member of his opponent's arsenal, and attempts a game-changing capture. Will this secret mission turn the tides or will this spy make the ultimate sacrifice?

Although the stakes are high, luckily this war is being played out on a 10-by-10 game board. Stratego, as the name suggests, is a game that relies heavily on strategically moving the game pieces that comprise your army as you attempt to capture your enemy's flag and win the game, while simultaneously protecting your own flag. Designed for two players of ages 8 and older, Stratego takes about an hour to play.

While the objective of the game seems straightforward, it's not as easy as simply moving game pieces around the board in hopes of coincidentally conquering enemy territory and happening upon a flag. Every attack is a risk because the ranks of your opponents' game pieces are hidden from your view. This means that you won't know ahead of time whether your piece will be outranked, become a prisoner of war and be removed from the board. However, each attack -- whether it's successful or not -- will reveal the rank of the opposing piece, and you'd do well to remember these ranks as you pit your game pieces against them in the future. Whatever your strategy, rest assured that you'll have the chance to test it again and again as you match wits with Stratego opponents.

Stratego first debuted in the United States in the 1960s (we'll take a more in-depth look at the game's history in a later section), and it's a game with staying power: nostalgia for those who grew up playing it and a new challenge to those who've only begun.

Stratego's even made the move from family game night to international competition with tournaments including the Stratego World Championships, which draws game enthusiasts from around the globe [source: International Stratego Federation]. The board game is being used in surprisingly inventive ways, too. Playing Stratego has been shown to help children with attention deficit/hyperactivity disorder (ADHD), a central nervous system dysfunction that makes it difficult to process sequences or systems, develop critical thinking skills and learn deductive reasoning -- all while going after the enemy's flag [source: Smith]. 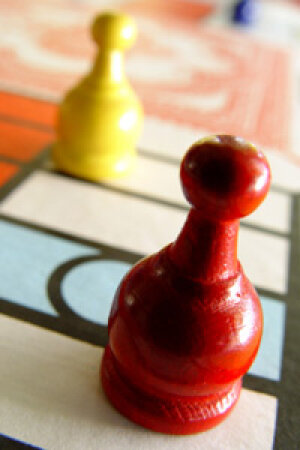 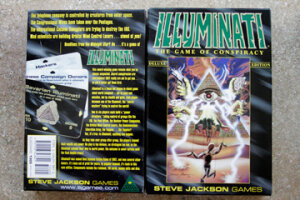