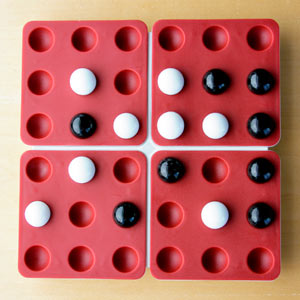 The next two strategies can be built either horizontally or vertically, and as the quadrants rotate, the orientation of your potential five-in-a-row could change mid-game. Both these strategies are powerful, and blocking them will be a challenge to everyone but the most experienced players.

The Straight Five: The Straight Five is a versatile tactic, and the more powerful of the two horizontal/vertical strategies because it's more difficult to defend against. Place three consecutive marbles on the outside row of one quadrant, then place two additional marbles in the outside row of an adjacent quadrant and line them up to create five in a row. If your opponent blocks your marble lineup on one quadrant, simply move on to the other adjacent quadrant [source: Pentago].

In addition to these offensive strategies, you'll want to perfect a few defensive maneuvers. In general, it's a good idea to keep your opponent's two-in-a-row chains from becoming three-in-a-row chains. However, you don't want to spend so many moves on blocking that you forget to build your own lines; the best defensive marble placement is one that can be incorporated into your own five-in-a-row tactic. For example, placing marbles in the center space of each quadrant is one good way to dominate the board -- it will push your opponent to the edges of each quadrant and prevent them from building a Monica's Five, as well as a Middle Five.

And never underestimate the value of psychological warfare, even in such a simple game. Purposefully distracting your opponent during play would be rude, but occasionally, just to be ornery, you could spend a few turns twisting quadrants solely to undo your opponent's previous twist.