How to Play Pentago 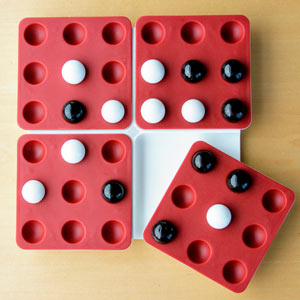 For the travel edition pictured here, the board's quadrants are attached to the base by sliding, swiveling mechanisms.The spatial reasoning required to plan ahead for quadrant twists will challenge children and adults alike.
Photo by Elizabeth Johnston/HowStuffWorks 2012

Like many popular board games (such as Monopoly), the original Pentago game has spawned several variations. There's a travel version, Pentago CE, with a plastic lid to keep the game's marbles in place. Although the game isn't exactly portable enough for playing during a car trip (the marbles and board aren't magnetic, meaning a bump in the road could cause a marble coup), the lid presents a workable option to prevent marbles from running amuck in a backpack or suitcase [source: Mindtwister USA].

To play Pentago anywhere, consider the mobile app for iPhone and Android; it offers solo and dual play. It was developed by UTV Indiagames and released in 2010 by Mindtwister USA [source: Gamasutra]. You can get a feel for the app with the "lite" version, which offers basic play against the computer free of charge, or upgrade to the full version for $1.99 (as of early 2012).

There's also an analog version for up to four players or teams, aptly named Pentago Multiplayer. This game includes nine quadrants of molded, turnable plastic as a playing field; instead of marbles, it uses four colors of disks [source: Mindtwister USA].

Pentago Classic, meanwhile, features a solid wood base outfitted with aluminum dividers to keep the four wood quadrants separated. This game uses a set of 16 black and 16 white marbles for its game pieces. As with all the Pentago variations, the quadrants rotate; however, unlike the other variations, the classic game's quadrants can be removed entirely from the base [source: Mindtwister USA].

Determine which player goes first by hiding a different-colored marble in each fist and asking your opponent to choose one. The marble revealed when you open your hand will be your opponent's color, and he'll make the first move by placing a marble on the empty game board. (Each player's marbles or disks should be all the same color, and if they play a series of games, they should alternate who goes first.)

To win the game, be the first to place five marbles in a row -- vertically, horizontally or diagonally, spanning two or three quadrants.

Although a tie game is rare, it can happen if one of two scenarios occurs [source: Pentago]: