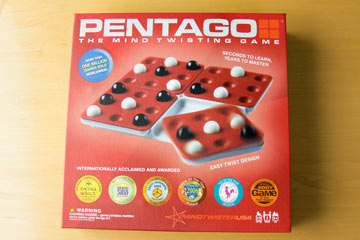 If Connect Four had a baby with Go, this is approximately what it'd look like. See more pictures of popular games and toys.
Photo by Elizabeth Johnston/HowStuffWorks 2012

When my brothers and I were young, my dad built a four-tiered vertical marble run out of wood and painted it red. The game was simple but fascinating, and I spent hours placing marbles at the top and watching them race down each angled chute to a collection tray at the base. I've loved every game that involves marbles ever since, including a more recent entry into the marble game market: Pentago.

Pentago features a board comprised of four rotating quadrants with a total of 36 divots designed to nest the black and white marbles that serve as game pieces. Turn by turn, players compete to create a row of five marbles by placing one marble on the board per turn.

Although this may seem like an effortless objective, players must contend with the added challenge of continually moving marbles: After placing each marble, the players must rotate one of the four quadrants 90 degrees in either direction (with a couple exceptions, which we'll explain in another section), and this adds layers of action, suspense and spatial challenge to the game. You can go from the edge of defeat to the verge of victory with each turn. And because Pentago is a fast-moving game that can be played in a matter of minutes, and since it lends itself to best-out-of-five-type tournaments, these dramatic moments come fast and frequent.

Recommended for ages 6 and older, Pentago has been compared to other games that are easy to learn but difficult to master. For example, the game of Go, whose origins can be traced back thousands of years to the palaces of China and plains of Tibet, has only a handful of rules. However, it can take a lifetime to fully explore the nearly unending strategies of game piece placement as you strive to control the most territory and conquer your opponents. And SET, a pattern-recognition card game with a complex substructure built on mathematical principles, offers a similarly fast learning curve with layers of complexities. 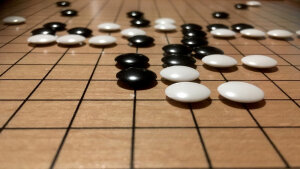