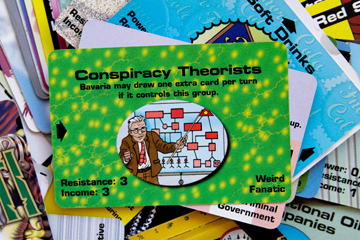 A group you might control, for example (as well as folks you might be playing the game with).
Photo by Elizabeth Johnston/HowStuffWorks.com

Let's not beat around the bush. Illuminati has a 16-page rule book for a reason: It's complicated. There seems to be an exception to every rule and then another exception to those. But let's familiarize ourselves with the simple objects of the game and how it's played, and soon we'll be well on our way to maliciously taking over the world.

So, how the heck do we seize all power? There are two ways to win the game:

Note that if multiple players are able to grasp domination at the same time (either by alliance or not), the victory is shared.

Now let's take one turn so we can see how the game works. This is no small feat; six things happen per turn. (This card game is no blackjack, in other words.) In the next section, we'll go into the cards more specifically, but for now, let's break it down so we can check out how each turn looks. In order, you will:

5. Transfer money. Move any of your money to groups you control. You can do two transfers per turn.

6. Take your special actions. This is where the special power each Illuminati group has comes in handy. Take the special privilege your group grants you.

And there you go! You've now played one turn of Illuminati. Ready to control the world? Yeah, probably not.