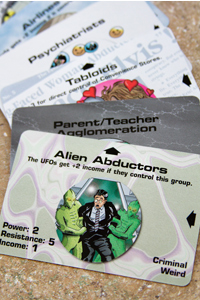 Illuminati cards are bright and clever, the perfect foil for a game that's rife with conspiracy, cheating and intrigue.
Photo by Elizabeth Johnston/HowStuffWorks.com

Illuminati seems deceptively simple when you open the box. All it contains, after all, is a stack of cards with fun, comic-book type illustrations on them, a couple of dice and some money sheets known in the game as Megabucks. Well, that and the 16-page instruction booklet.

When beginning play, be aware that you might not want to ask your six year-old cousin to join in. Not only is the game complicated and above your average Monopoly strategy, it's also long (about three hours, if you've played before) and has some more mature themes. (Cards, for instance, speak of death, disease and destruction. All tongue-in-cheek, but those kindergarteners can be notorious for taking jokes literally.)

You're going to want to play with four to six players. You can play with less, but you won't have as much wiggle room in terms of negotiation (not to mention malicious backstabbing). Add more players, and you'll have to tweak the rules to add some more money to your bank and add at least an hour or so to your time set aside for global takeover.

To begin, each player draws a black Illuminati card. (Don't worry, we'll tell you what that means in the next section.) After that, all the players will roll both dice; the player with the highest score goes first. Play proceeds counter-clockwise after that.

Next, let's turn a conspiratorial eye to the next section, where we'll see how the basic structure of a turn works.