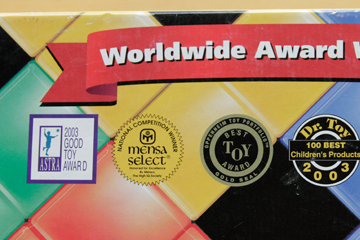 Blokus is a so-called "hobby game," meaning it's a bit more specialized than more mainstream games. Usually played at a clip (a Blokus game is generally a half hour long), these games prize strategy above, say, the luck of the draw that comes with Uno [source: Thai].

The game was dreamed up by a French designer, Bernard Tavitian. Apparently not one to loll around on the couch and watch reality shows in his free time, Tavitian boasts a master's degree in mathematics, an engineering degree and a doctorate in biophysics, among other accomplishments [source: Blokus].

Not satisfied with book smarts, Tavitian was also a painter. One day, he was attempting to frame a painting he had finished of an orchestra represented by geometric figures, and he decided that he wanted colored shapes to frame the picture. With the thought that each similarly colored piece should never touch, the game of Blokus was born [source: NAGC].

Another influence? The four-color theorem, first introduced in 1852 by Francis Guthrie [source: Thomas]. The theorem states that on any given map, you only need four colors to distinguish separate territories -- that is, without any borders of the same color touching each other, side by side. Well, it's a nice theory. But only a computer program has been able to prove it, and mathematicians are still searching for the ultimate human proof [source: MegaMath].

Theorems or not, you're still playing a brain game. As we said, it's gained a huge following in general and has been heralded by smarty-pants organizations like Mensa (a society for those special folks with the highest of high IQs) as a "Select" game, which "indicates that a game is original, challenging and well-designed" [source: Mensa].

Even scholarly journals like Mathematics Teaching in Middle School have highlighted the game's brain-boosting potential. An article published in the journal in April 2011 studied the use of Blokus in math classrooms as a learning tool. Authors Michael and Paula Maida determined that investing a short period of time in playing the game yielded improvements in students' geometric and spatial reasoning, as well as problem-solving skills [source: TeacherWeb]. (Middle schoolers, be sure to keep this article handy when you're caught playing Blokus on your phone in math class.)

Blokus can help you with more practical things, too. For instance, the financial investment Web site The Motley Fool even suggests that making agonizing decisions about where to situate your squares on a Blokus game board teaches you patient investment strategies. By judging priorities in a board game (should I attack aggressively or build patiently?), you're able to plan for the future while keeping an eye on what resources you need on hand [source: Maranjian].

Want something more challenging? Give one of these spin-offs a try. In Blokus 3D, you use three-dimensional blocks to create stacks. The goal is to place shapes so you have the most visible squares at the top of the stacks. Blokus Duo is a variation of Blokus designed just for two. Blokus Trigon has the same rules as the original, but it comes with a hexagonal board.