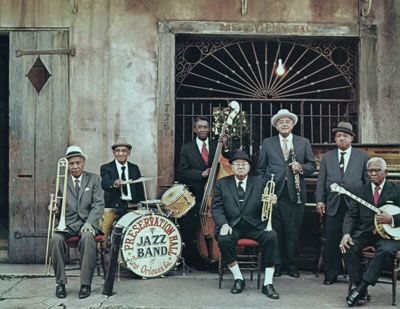 Beginning listeners are often disoriented by their first experiences with jazz. Its structure is typically more complex than other popular forms of music. And because of its improvised nature -- with multiple melodies and rhythms working together -- listeners accustomed to more structured, predictable forms of music might find jazz difficult to follow. But those same things that make jazz difficult to appreciate at first are what more seasoned listeners come to relish.

­­­T­he first step in understanding how jazz works is knowing what to listen for. Jazz ensembles -- which can have two to 20 players -- range in style, size and instrumentation. But they are all united by three basic elements: improvisation, syncopation and blue notes.

­­Now that we know something about the basic elements of jazz, let's take a look at jazz history.

Jazz music is all about improvisation --­ there is a method to the mayhem. When listening to jazz, consider each of the above elements. Pay attention to how the musicians interact with one another through what they play, looking for differences in each relationship. You may also find it useful to identify the melody of the piece being played and listen for it throughout the song. Take note of the way the soloist and the accompanying musicians weave notes together in harmony.

In a performance, there are certain parts of a song that all of the musicians know. It is from here that musical exploration and innovation take off. Often, in between taking turns doing solos, a jazz ensemble will return to a familiar part of the song, usually a chorus. When you've identified the melody, listen for variations of it in the different instruments and solos. You'll find that your appreciation for the skills and creativity of the musicians will increase the more critically you listen and perceive the complexities of jazz.

However you approach listening to jazz, it's best not to try to take it all in at once. Focus on one thing at a time.