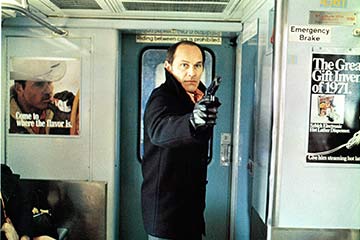 Tony Lo Bianco points a gun on a subway in a scene from the 1971 film 'The French Connection.' The movie was shot guerilla-style all over New York.
20th Century-Fox/Getty Images)

Any film can be a guerilla film. Because the term doesn't apply to any particular genre, budget or style of directing. The main characteristic of guerilla films is that they're shot in public places without going through the proper permission channels.

The term "guerilla" is usually associated with rampant disregard for authority and convention. Unlike warfare of the same name, guerilla filmmaking is actually controlled, although it is subtly rebellious out of sheer necessity. This route is often taken because permit costs can rack up in a hurry, blowing what little budget an indie film has to work with. Even some big-budget films have shot certain scenes guerilla-style if getting permission is too big a hassle.

"Probably more films than you might think at least have an element of it that was shot guerilla," says Noam Kroll, award-winning Los Angeles-based filmmaker and owner of post-production house Creative Rebellion. He notes that subway scenes in "Black Swan" were filmed without permits, although the rest of the movie was done on the up-and-up. "When I usually talk about a guerilla film, it's a film where the entire film was shot that way."

Also known as "run and gun" filmmaking, many guerilla filmmakers dodge permits (and let's face it, the law) in favor of the "do now, apologize later" approach. Cast, crew and equipment are usually minimal to avoid getting busted by security. In fact, you might walk right by a guerrilla film in progress without even realizing, if it's being done stealthily enough. Films that fail to fly under the radar get shut down in a hurry, which is clearly embarrassing and definitely disruptive to the film schedule!

Guerilla filmmaking has been around since the dawn of cinema, although there wasn't anything illegal about it in the good old days. "If you trace back to the early days of film everything was guerilla," explains Kroll. "Back then there was no need for a location permit. At some point down the road there were parameters and rules put in place specifically for shooting because it became so widespread."

After the rules changed, so did the tactics of penny-pinching producers. Fortunately, your last name doesn't have to be Spielberg, Ephron or Cameron to get a movie made (although it definitely helps). Deep pockets can certainly dress up a film and make the process easier, but many aspiring filmmakers have built respectable, successful careers on movies that cost little or nothing to make. Find out how they did it, next.

Funding and Forms of Guerrilla Films

Even guerilla films require at least a little bit of cash to keep them going. Although actors and crew are often not paid (usually there's some sort of deal worked out where they get a percentage if the film is sold for distribution), there are ancillary costs that have to be covered, like equipment, film processing, even meals. Some producers put up their own money or try to raise it via friends, family and online campaigns like Kickstarter and Indiegogo [source: Fera].

Some guerilla films do have private investors. Often, however, those films still choose to avoid permit costs in favor of spending the money on other aspects of the filmmaking process.

Filmmaker Robert Rodriguez, who made "El Mariachi" on a $12,000 budget had to come up with the last three grand himself -- as a human guinea pig for a cholesterol-lowering medication, which required that he be checked into a medical facility[source: Broderick]. Dedication has a name, my friends, and that name is Robert Rodriguez. His movie was filmed in Mexico on locations he could get for free and most of the scenes were shot with just one take.

Fans of 1984's "The Terminator" might be shocked to learn the cult favorite was a long-shot with such a small budget that it was made guerilla-style; this is actually how director James Cameron was trained by Roger Corman. During the shooting of the final scene on a deserted road, a policeman drove up and asked for Cameron's permit. He pretended he was doing a student film and was let off with just a warning [source: Moore]. I'm guessing he doesn't have to sidestep the rules (or the permit costs) anymore, thanks to his stellar achievements since.

Academy Award-winning film "The French Connection" managed to film guerilla-style all over New York City, despite having a pretty big crew [source: Kroll]. Another head-scratching example is "Escape From Tomorrow," which was filmed over a period of weeks at Disneyland and Disney World without permission of any kind [source: Burchette]. According to Kroll, the crew managed to dodge Mickey's wrath by using handheld (read: touristy) cameras and surreptitious communication methods, like cell phones instead of walkie-talkies.

Your Film's Been Made -- What Happens Next?

Film festivals have been around for ages, and movies can always be submitted to distribution houses for purchase. A relative newcomer to the scene is online distribution, whereby a filmmaker sells the film to a service like iTunes, NetFlix or Hulu. Once scoffed about by traditionalists, this route is picking up steam in 2015. "There is an audience that's online now and they're willing to pay for good content," says Kroll. "It's no longer the dark horse."

Pluses and Pitfalls of Guerilla Filmmaking

Few things in life are free, and movies are no exception. Films cost money to make, and since most indie flicks have little to work with it's no wonder they cut corners wherever possible. Obviously, the biggest benefit of guerilla-style movie-making is the cost savings. Permits to film in certain areas cost hundreds, even thousands of dollars. As a result, a small film can be easily bankrupted if multiple permits need to be bought and paid for.

Interestingly, a permit is required even if you're filming with permission on private property or in your own home (though that varies by location). "Naturally, people don't often follow this rule if shooting at a friend's house, or at the business of someone they know well and have permission from," Kroll says. "But from a legal standpoint it is required, even in those types of circumstances."

Another way that guerilla filmmaking saves money is the reduced editing time associated with the shooting style. Since the actors and crew are essentially breaking the law, they have to be ready to shoot quickly and efficiently. Known as "one and done" in the movie industry, this lessens the amount of footage that requires editing down the road, which lowers cost, but also potentially the quality of the scene [source: Broderick].

Time savings is another major bonus to sidestepping The Man. The permit application and approval process can be lengthy, cumbersome and a major buzzkill to the creative process. Also, there's no guarantee that permission will be granted even if you do follow the proper channels. "For instance, there might be a beach you want to shoot on, but for whatever random reason there are areas where you're not allowed to film, even with a permit," Kroll says.

For these significant benefits, there are also pretty serious risks. Some coppers will laugh and send a guerilla film crew on their merry little way, but others can and do enforce hefty penalties, such as fines, confiscation of equipment and/or footage, and may even arrest the crew. "If you're shooting this way you're doing it at your own risk," says Kroll. "You can never claim that someone else is responsible." In other words, take the bad with the good and don't go crying to mama if you get busted.

If you decide you want to chance it, here are some techniques to keep in mind.

In addition to a permit fee, which might run around $700, a location will probably require you to get insurance as well, which might run another $600 to $800 [source: Kroll]. That's to cover, for instance, someone getting hurt falling over a cable on-set. As a cost-saving (but legal) measure, some directors look for locations where they can shoot for free legally and only pay for the insurance. 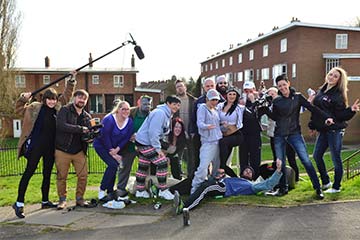