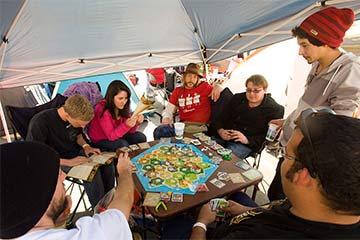 A group of campers play "Settlers of Catan" as they wait for a grand opening of a Chick-Fil-A in California in 2011.
© Jebb Harris/ZUMA Press/Corbis

It's family game night, and someone's brought along a German-style board game. Although it might sound like a beer-drinking game, it's family friendly. Also known as designer board games or Euro board games, German-style board games are created following a series of fairly strict guidelines. In general, the games must last an hour or so – which makes them popular among the short-attention-span set. They have easy-to-understand rules, feature indirect competition between the players and are played with physical markers that move along a board – though not with the roll of dice, which introduces a random quality that German-style games don't have.

Not only are the games themselves fairly short, the time between turns is also short, so players aren't sitting around waiting for each other to wrap up play. And players interact with one another during their turns, again minimizing downtime throughout the games.

As opposed to American-style games -- like Risk -- German-style games are won on strategy, not conflict. They feature little or no luck, and economic, not military, themes. In addition, all players stay in the game until it's over. The look of the game is also important. German-style games often feature beautiful, intricate images, wooden player pieces and 3-D aspects. Because the art is such an essential part of the game, the game's designer, who may or may not be German, is listed on the box – hence, the name "designer games."

The games often involve more than two players, and each player's actions affect the choices of the others. Because conflict in these types of games is rare, they've been compared to a multi-player game of solitaire. They've also been compared to a race, with player interactions coming in the form of bidding, piece placement and choices of roles or resources. Although these games originated in Germany, a country that's crazy about board games, not all of these games are from there now [source: Pusipher].

The best-known German-style game in the United States is Settlers of Catan, and the best-known designer is Reiner Knizia, from Germany, who has published more than 300 games. [source: Nosowitz]. Often the games have themes, such as art and architecture, landscape building or developing a plantation.

Other popular German-style games include [source: Board Game Geek]:

So if your family is looking for a fast-moving game with lots of player interaction, a German-style game might be just the thing.

The Human Fly, or the Daredevil Who Made Evel Knievel Seem Sane
Birthday Astrology
How 'Junkyard Wars' Works