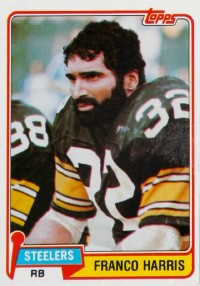 in
Franco Harris was the fifth rookie  1,000 yards. See more pictures of the best football players.

The argument might be made that Franco Harris was the smartest runner who ever played in the NFL.

At a well-tapered 225 pounds, he looked like a typical head-down, pile-driving line-smasher. But, while it was true that when necessary he could get the tough inside yards, that wasn't his usual style. Instead, Harris was a fullback who ran like a scatback. A big scatback.

Many of Harris's best runs came when he would knife off tackle and then cut back against the grain. His speed and agility gave him a step on pursuing defenders; his size allowed him to trample those opponents left in his path.

Harris's brainiest runs came when he was trapped along the sideline. With no hope of escape, he would neatly step out of bounds, much to the disdain of Steelers fans who wanted him to try for a few more meaningless inches.

Franco knew, of course, that it was more important to the Pittsburgh cause that he stay healthy for the next play. His style enabled him to play 13 seasons in the NFL even though he ran the ball 2,949 times. His 12,120 rushing yards ranked third all time in NFL history when he retired after the 1984 season.

At Penn State, Franco (born 1950) was considered somewhat of an underachiever. Many considered it a stretch when the Steelers made him their first draft choice in 1972. Although he didn’t become a starter until late in the season, he rushed for over 1,000 yards and helped put Pittsburgh in the playoffs.

In the final seconds of the team's first playoff game since 1947, he caught the "Immaculate Reception," a shoetop grab of a deflected pass that he turned into a touchdown, to give Pittsburgh the victory.

Before he was done, the dignified, soft-spoken Harris led Pittsburgh to four Super Bowl victories. In Super Bowl IX, he rushed for 158 yards on 34 carries and was named MVP.