I heard someone mention a 'third team' in a football game. What is that? Who are these guys and what do they do? 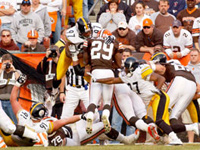 In this photo you can see an official wearing black and white, just behind the action.
Photo courtesy Pittsburgh Steelers, Mike Fabus

A football game actually consists of three teams, with the third team being the officiating crew. They also have a uniform, which consists of a shirt with vertical black and white stripes, white pants, and a white or black hat. These men are responsible for enforcing the rules of the game as outlined by the NFL rules committee. An NFL officiating crew consists of six men, and each has distinct responsibilities:

These men must memorize and be ready to call an infraction in a split second. An official signals an infraction by throwing a yellow flag. There are many rules in the NFL Rule Book; here are a few of the ones of which you might be unaware:

For more information about American football, check out How American Football Works.

What Are the Costs of Canceling College Football?
How the Physics of Football Works
Pop Warner