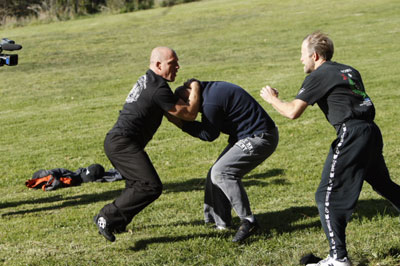 One thing that's clear watching "Fight Quest" -- it's not a phony reality show. The punches are real, the blood is real, the bruises and welts are real. Smith explains:

"If there's one thing that I can communicate about the show that people don't understand is -- people seem to think that it's not as dangerous as it looks, that there's somebody behind the scenes making sure we don't get hurt. And that never happened."

While Smith managed to escape serious injury, Anderson had a rough go of it and ended up taking several trips to the hospital:

"In Japan I got messed up pretty bad. During training I got kicked in the head by a 210-pound champion. I only weigh about 145 pounds. He kicked me in the head, and I immediately went blind in my right eye. It just shut down. It was like I'd been staring into the sun. So I had that blind spot and a concussion, then had to go on a 10-mile run. The concussion was not a big deal and I could see again after about a day, but my leg was swollen up so bad I couldn't walk properly for about two weeks. I broke my face too -- my cheekbone got broken from a punch."
Smith spars in a waterfall.
Discovery Channel

While Japan was tough on him, the most excruciating injury came in Indonesia. Anderson got a contusion on his foot after his kicked was blocked by an opponent's forearm. He explains:

"In Indonesia I got a knot on my foot, pretty much the size of an egg, underneath the skin on my foot. It was pretty painful and could be annoying."

Smith said that the foot looked like "a loaf of bread." Without a medic on that shoot, Anderson was forced to go to a less traditional physical therapist:

"At the end of the day, me and the Indonesian guys were comparing our bruises and they saw my foot and were laughing. Then they said 'Massage, massage.' So we loaded up into a van and drove about an hour and a half. We got out of the van and went into what could only be described as a crack den. They bring us in and there's this fat guy with purple sweat pants and a Hard Rock Café t-shirt, smoking cigarettes on a couch. I said 'You guys brought me to the wrong place!' They sit me down in front of the guy and he immediately looks at my foot and grabs it and starts grinding this huge lump in my foot like he's trying to smash it. He basically smashes the bruise out of my foot. All the blood disperses throughout my foot -- which obviously is not a sound medical procedure. My foot wound up getting infected from it. Crazy intense pain. I couldn't walk for three weeks."

If you'd like to learn more about "Fight Quest" and m­artial arts, please look into the links below. ­