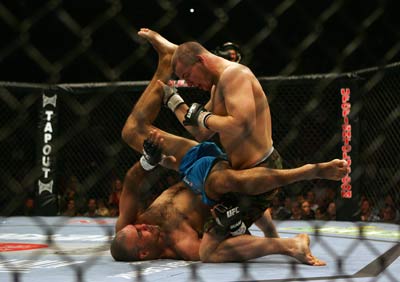 Gary M. Prior/Getty Images
Unlike boxing, where athletes can only strike with their fists and only above the belt, the UFC's rules allow competitors to use punches, kicks, elbows, knee strikes, takedowns and submissions to win a contest.

"I've been to everything. I've been to the NBA finals. I've gone to a Super Bowl. I've gone to big playoff games, and I've been to big fights here in Las Vegas. I don't think any other sporting event stacks up to it." What sport tops basketball, football and boxing? According to its president, Dana White, it's the Ultimate Fighting Championship (UFC).

The UFC bills itself as the premier Mixed Martial Arts (MMA) organization, but its history is filled with highs, lows and controversy. After nearly folding in the late 1990s, the UFC reinvented itself and attracted new legions of fans.

The UFC organizes, promotes and hosts MMA events, which feature several bouts. Each bout is a fight between two different competitors. Like boxing, the fights are divided into rounds and are under the supervision of a referee, although MMA events are more complex than a typical boxing match.

Standard UFC bouts have a limit of three rounds (championship bouts have a limit of five), with five minutes to a round. Fighters get a one-minute break between rounds. Unlike boxing, where athletes can only strike with their fists and only above the belt, the UFC's rules allow competitors to use punches, kicks, elbows, knee strikes, takedowns and submissions to win a contest. Fighters are allowed to strike each other both above and below the belt (with a few restrictions). Early in its history the UFC claimed that its events featured no-holds-barred (NHB) fighting, but this is a misnomer. Even the earliest UFC fights had rules that all athletes were expected to follow. These included:

The Nevada State Athletic Commission, which regulates all boxing and martial arts exhibitions in the state of Nevada, identifies 31 fouls. Athletes who commit fouls can be penalized or even disqualified. Not all fouls are directly related to physical violence -- for example, you commit a foul if you hold on to the fence, use abusive language while inside the ring, fake an injury or drop your mouthpiece on purpose to delay the fight. A complete list of the fouls can be found on the UFC Web site.

In addition, the UFC adheres to the Nevada State Athletic Commission's drug policy, which expressly forbids the use of recreational or performance-enhancing drugs. Fighters who test positive for drugs before a bout are not allowed to fight and may face additional disciplinary action. If a fighter wins and it is later determined that he used drugs, the commission may change the result of the fight to a no contest.

In the next section, we'll look at the basics of the UFC, and learn where fights take place.