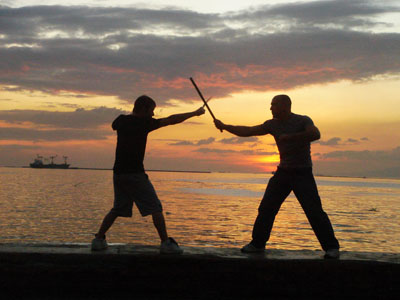 The fists come at you in shadows. With no time to­ du­ck or block, the only option is getting cracked in the nose. Your eyes water, pain shoots down your spine and you lose your balance. Blood flows from your nose like water from a faucet and the swelling begins immediately. Does this sound like your idea of a good time? Probably not, but for the hosts of "Fight Quest" it's business as usual.

Most people go to great lengths to avoid getting hit in the face. The co-hosts of "Fight Quest," Jimmy Smith and Doug Anderson, actually seek it out. On the new Discovery Channel show, the pair travel the globe to train and fight in a variety of martial arts with local masters. They immerse themselves in the local culture and train with native experts for five days before facing off against the toughest competitors the country has to offer. "Fight Quest" blends educational, cultural and travel programming with the hard-edged thrill of actual fights.

Smith and Anderson come from two very different backgrounds. Smith grew up in southern California, training mainly in Brazilian jiujitsu. After spending time teaching seventh-grade algebra, he now competes as a professional mixed martial artist. His current record as a pro fighter stands at six wins and one loss. Anderson grew up in a rough New Jersey neighborhood near Philadelphia. He's an Iraq war veteran and leans on his boxing and U.S. military training for his technique. Doug plans to begin his mixed martial arts (MMA) career with some amateur fights and hopes to turn pro soon.

To shoot the pilot episode, New York-based production company North South Productions plac­ed ads in various martial arts publications and Web sites looking for an "outgoing, charismatic, engaging, smart and inquisitive personality to co-host a new martial arts television series." The ad also stated that "This show will have you push your physical and emotional limits so you must be up to the challenge" [source: Meta Tube]. They received hundreds of audition tapes from fighters all over the United States before settling on Smith and Anderson. The final line of the ad, "must be willing to travel," was quite an understatement -- the hosts and crew went to 10 different countries, from Mexico to Indonesia.

We were lucky enough to interview show producer Chuck Smith, as well as both Jimmy Smith and Anderson as they train at their home gyms for upcoming MMA matches. They were excited about the show and very eager to chat about their experiences.

In this article, we'll learn about the production of "Fight Quest" and how the hosts survived. We'll also explore some of the fighting styles and cultural experiences they encountered, as well as the brutal training methods and fights the pair endured.

Q: Was there any fighting style that made you nervous?

A: I'm down for whatever. There were definitely a few styles that I was a little bit intimidated by going into, but I'm always down for anything. The way I feel about everything in life is that if another human being can do it, then there's no reason why I can't do it, too.

Q: Which styles are you interested in learning more about?

A: I loved stick fighting [kali], it was super intense. The insanity of it, it's so crazy. I loved kajukenbo for the technical aspects of it. It'll be useful to me as a cage fighter. It's got a good blend of different techniques.

Q: How would sum up your overall experience on "Fight Quest"?

A: Sometimes I would look around and say, "what am I doing here? This is the dumbest thing I've every done." But at the end of the day, I'd look back on it and say, "You know what, I made it through, no matter how tough it was. And now I have a pretty cool story to tell."

Q: Are you up for a second season?

­A: Absolutely, man. Absolutely. That would be the ideal situation. If I could spend another year traveling around the world and getting punched in the face. It doesn't get much better than that, man.