Whats the difference between a documentary and a docudrama? Does either one have to be true?

by Julia Layton
Next 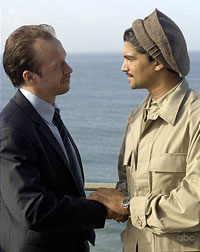 The recent uproar from members of President Clinton's administration regarding ABC's docudrama "The Path to 9/11" (airing 9/10 and 9/11) has brought into question the nature of truth when it comes to television and movies. The distinction between a docudrama and a documentary is clear. A documentary is a non-fiction film that re-enacts, comments on or just generally retells history. It is entirely factual, even though it may also state opinions about the facts it presents. A docudrama, on the other hand, while based on historical events and typically presenting factual bits and pieces, is first and foremost a dramatic story. It does not have to be entirely factual, and it assumes a certain amount of dramatic license to change and/or make up events in order to increase the appeal of the story. Essentially, a docudrama is a fictional story that uses actual historical events as its context.

So what exactly is the problem with "The Path to 9/11"? People are upset about the miniseries on a few levels. One area that has former members of the Clinton administration in a tizzy has to do with the perception of a truthful representation and the defamation that can result from that perception. Although a docudrama does not have to be true, if it is presented as being based on the facts, as ABC has done, then making up certain crucial incidents leads to some problems for the real people being portrayed as taking part in those incidents. One scene reportedly depicts one of Clinton's security advisors, Richard Clarke, refusing to let the CIA assassinate Osama bin Laden because he felt the potential fallout might be too politically damaging to Clinton, who was in the midst of the Monica Lewinsky sex scandal that already threatened his presidency. According to both Clinton and Clarke, this never happened. While this scene may add to the drama of the movie, it also presents a crucial piece of evidence that, if fictional, cannot be chalked up to dramatic license. The interaction is central to the movie's argument: that politics consistently stood in the way of attempts to neutralize terrorists before the World Trade Center attack occurred. If ABC bills the movie as a docudrama based in historical fact, and people watching the movie believe the incident between Clarke and the CIA actually occurred, ABC may be guilty of character defamation.

This leads us to another area of concern surrounding the movie: People are extraordinarily sensitive about what happened on September 11, and fictionalizing the events leading up to that event may be an irresponsible act of broadcasting unless the fiction is clearly delineated from the nonfiction. In ABC's movie, there is no distinction. There are no rules governing docudramas, but some may argue that it is irresponsible to confuse fact and fiction when depicting crucial incidents surrounding such an important and traumatic event.

Within the context of wondering about the responsibility of filmmakers in delineating fact from fiction, the topic of documentary filmmaking itself ends up under fire. Documentaries by definition must be non-fiction. Commentary and opinions are allowed, but misrepresentation is not. In the last 15 years or so, probably beginning with the surprise success of Michael Moore's "Roger and Me" in 1989, documentaries have undergone some changes. First, some documentary filmmakers now aim for commercial success when they create a film; and second, in a development not unrelated to the first issue, some documentary films are in fact fictionalized to some extent through misrepresentation and omission. Moore's 2002 documentary "Bowling for Columbine" has been the subject of extensive criticism in this regard. One scene that has many documentary filmmakers (and NRA members) particularly incensed is the sequence depicting Charleton Heston's speech at the NRA meeting in Denver, Colorado, just 11 days after a dozen students and one teacher were shot to death at Columbine High School in the city of Littleton, 10 miles from Denver. Moore edited and spliced together chunks of Heston's speech in a way that some believe significantly changed the tone and content.

Some say that Moore's editing of the speech -- and his addition of at least one clip from a speech that actually happened in North Carolina a year later -- results in a tone that seems disrespectful and callous toward the tragedy that had happened just a week and a half before, while the full transcript of Heston's speech reveals no disrespect or callousness. So the issue is not that Moore edited the speech, but that he edited it in a way that omitted key statements and spliced together pieces that did not in fact occur in succession, leading to a misrepresentation of the true tone and content of the speech.

While many documentary filmmakers and film critics take issue with what they perceive as the corruption of the documentary genre, others point out that the act of recording the "truth" on film is fictionalizing in and of itself. Filming something from a particular angle imparts a point of view to reality, they say. And in putting together a film, even documentary directors -- and even those documentary directors who still use the traditional point/counterpoint format in their documentaries, consistently presenting both sides of the issue -- must make choices about which facts to put in and which facts to leave out. As a result, some claim that there can be no film that is entirely "true" or "factual." Still, others note the difference between leaving out certain facts due to time constraints or to make for a more palatable film, and leaving out certain facts in order to deliberately mislead the audience. A documentary that employs techniques of deception or misrepresentation, they claim, is not a documentary at all.

For more information on documentaries, docudramas and related topics, check out the following links: