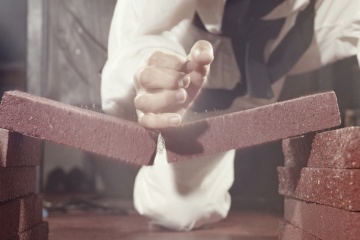 What great force you have!
H. Armstrong Roberts/ClassicStock/Getty Images

What exactly is a newton? No, not the tasty cookielike treat, but the unit of force. A newton, to be precise, is the amount of force it takes to shift a kilogram of stuff one meter [source: Merriam-Webster]. This also turns out to be roughly the same amount of force with which that celebrated apple supposedly clonked Isaac Newton on the head, inspiring his discovery of gravity. Coincidence? So they say. But that's a different story. The reason we're talking about the newton is because it's a useful way of measuring the force needed to break things like boards.

Back in the '70s, a couple of physicist martial artists decided to apply one of their passions to the other and did some research on board-breaking. How is it, they wondered, that we can lord over hard lumber with our puny hands and feet? Our big advantage, the thing we've got that that inanimate matter doesn't, is speed. And if we circle back to good old Newton (Isaac, not the cookielike treat or the unit of measurement), we might remember from our high school physics class that force equals mass times velocity. In other words, the faster you throw a punch, the harder it hits. But how much speed do you need?

The physicists found that a typical beginning practitioner of karate can work up a hand speed of 20 feet (6 meters) per second, which is just enough to break through a standard 1-inch (2.5-centimeter) piece of pine (students sometimes use reusable plastic training boards that are roughly the same dimensions and designed to break under the same amount of stress).

One of the physicists, Ron McNair (who later died aboard the space shuttle Challenger) was a black belt. It turned out he could get his karate chop going up to 46 feet (14 meters) per second, which means he could hit stuff with 2,800 newtons of force. If that doesn't sound impressive, consider this: It only takes 1,900 newtons to break a 1.5-inch (4-centimeter) thick concrete slab.

As mentioned on the previous page, speed isn't enough. Even speed and accuracy together aren't enough. Follow-through is crucial. And it's not just because we tend slow down out of fear of self-injury, it's because we tend to slow down no matter what. The reason for this was fathomed by yet another physicist martial artist who discovered that your hand reaches its top speed when it's 80 percent of the way through its strike. That's another reason why it's so important to aim your blow beyond the surface of the board.

Once a hand or foot makes contact with the board in just the right spot and with the necessary speed, the wood, like all material, will begin to oscillate until it just can't take it anymore. When material can't take any more oscillation, that means its elastic limits have been breached. Limits breached, with a loud sigh (snap), it surrenders (breaks) [source: Rist].

Thus, board-breaking is accomplished. But here's the big, looming question: Why do it? We learned earlier that proponents believe board-breaking is a useful gauge of progress, but is that really true? Is smashing lumber to pieces really a good idea?