by John Donovan Sep 7, 2018
The Wichita State Shockers mascot, the WuShock, is supposed to be a shock of wheat. And what better than a shock of wheat to get your team going? Peter Aiken/Getty Images

All over the country in our U.S. institutions of higher learning, a few chosen students routinely pull on cartoonish outfits and parade around in public for the amusement of children, fellow students, alumni and rowdy fans in a familiar schtick steeped in tradition and foolishness.

Because, really, what says future leaders of America better than some super-buzzed Midwesterner decked out as a shock of wheat?

"I claim mascots bring world peace," says Jennifer Smith, who is admittedly a bit slanted in her views as "prez" — her term — of the fledgling National Mascot Association. "When a mascot shows up, everybody has that mascot in common. You can talk to the stranger next to you and he may have been a Trump fanatic, he may have been a Hillary fanatic, but you don't really care. A mascot brings you together.

"They're silly and ... I don't know ... they're peaceniks. They bring us together in a commonality. I just think they are seriously important in the United States of America."

As the college football season ramps up once again, we're bombarded with ever-familiar questions: Can anyone beat Alabama? Who's the front-runner for the Heisman Trophy? Wings or dogs at the tailgate? And, of course: What does Big Al the elephant have to do with the Crimson Tide?

A Brief History of Mascots

The first bit to know about college mascots is that the connection between a school's nickname and its mascot isn't always apparent. While Albert and Alberta, who represent the University of Florida, are clearly Gators, and WuShock, the Wichita State mascot is, indeed, a shock of wheat (Wichita State's teams are the Shockers), it's hard to reconcile how a tree came to be the mascot of the Stanford Cardinal. Or how an elephant (see Now That's Interesting, below) serves as the mascot for the Alabama Crimson Tide.

Mascots have been part of college athletics for well over a century. The word itself hearkens to the 19th century — when people used words like "hearken" — and is translated, roughly, as something that brings good luck, a talisman.

Yale was the first to adopt a mascot, which happened to be of the live animal variety. Handsome Dan the bulldog was introduced in 1889. His line has carried through to today. Handsome Dan XVIII (real name: Walter) is the current mascot and, evidently, everything a Yale man (or woman) aspires to be. "Walter, who graduated with high honors from obedience school, is a good role model for all student-athletes," says the Yale athletics site. Yale students and visitors customarily greet Dan/Walter with a cheer of "Boola, boola." (It's a Yale thing.)

These days, a costumed Dan/Walter, with a real person inside, is at many Yale sporting events, too. Similarly, a big-headed, human/bulldog named Hairy Dawg is at the University of Georgia Bulldogs sporting events (as is a real, live English bulldog named Uga). A costumed human Bevo runs around for the University of Texas Longhorns (as does a real live longhorn, Bevo at UT football games).

Yale University was the first school to adopt a mascot in 1889 and it was Handsome Dan the bulldog. And the current Handsome Dan really is handsome, isn't he?
Adam Glanzman/Contributor/Getty Images

"Mascots show you what it means to be true blue," says Smith, who is also the "Queen of Fuzz" — again, her term — at a mascot manufacturing firm, AvantGarb, in Indianapolis. "Coaches can leave, players can leave. Presidents of schools can leave. You can graduate. But the mascot remains just true blue to the team, to the school, to you. To your friends. Mascots are kind of like a permanent memory, and you can visit it. You can go back to school and there it is."

Whatever, mascotting is not something to be taken lightly. The University of Florida, for an example, says mascots can expect to work as many as 15 hours a week between games and other school-sanctioned appearances. Tryouts for the mascot of the Arizona State University Sun Devils, Sparky, are based at least on part on how many consecutive push-ups a prospect can do. Applicants to become the Michigan State Spartans' mascot, Sparty, need to write an essay.

Candidates to become Brutus Buckeye, a big-headed human embodiment of a tree nut who represents the Ohio State Buckeyes, "MUST SCHEDULE CLASSES AROUND PRACTICES, WEIGHT TRAINING AND GAMES," according to the Brutus tryout sheet. "[R]epresenting the character of Brutus is secondary only to your academic pursuits at The Ohio State University," it says.

How important are mascots to their schools? Often, one mascot is not nearly enough to meet demand. Seven Bucky Badgers take part in more than 600 events a year for the University of Wisconsin Badgers. The University of Notre Dame Fighting Irish are represented by three different Leprechauns.

A mascot, more than anything, has to be willing to be friendly and nonthreatening to curious but wary children, not to mention possibly inebriated students and alumni. It's part of the privilege of pulling on an oversized head and slipping into a silly costume to represent a school.

"Kids adore mascots. Kids perceive them almost, I think, as cartoons come to life: This magic of the screen is now walking with you. It's an amazing experience," says Smith, who started in the mascot biz in a garage in Berkeley, California, in 1987. "And while the kids perceive that, the parents and adults are perceiving the same thing. The magic of our imaginative world is walking with us. And you can touch it. It's very, very, very, very exciting."

The Stanford Cardinal tree is perhaps one of the stranger college mascots, don't you think?
Christian Petersen/Getty Images

The Best, the Worst, the Weird

In mascot circles — yes, they exist — there's an ongoing competition over who has the best mascot. The problem with that is the parameters. A lot depends on your sense of what a mascot should be. Fun? Fierce-looking? Clever? True to life? One of a kind?

When it comes to costumed mascots, much depends on the person inside the costume. As far as the costume itself? "The goal is often to make it fierce but make it friendly," Smith says. "You can do it. It's just working with a bunch of fuzz."

We're not about to crown any mascot bests, worst or weirdest. But here are some to consider:

Sir Big Spur is one of the South Carolina Gamecocks mascots. He chills on his own field goal post during games at Williams-Brice Stadium in Columbia, South Carolina.
Ed Zurga/Getty Images
NOW THAT'S INTERESTING
The story of Big Al, the University of Alabama's elephant mascot, began how all great sports tales begin: with a sportswriter. Back in 1930, according to the university, sports scribes were aghast at the sheer size of the football team. Everett Strupper of the Atlanta Journal wrote: "At the end of the quarter, the earth started to tremble, there was a distant rumble that continued to grow. Some excited fan in the stands bellowed, 'Hold your horses, the elephants are coming,' and out stamped this Alabama varsity."

How Coconut Oil Went From Superfood to 'Pure Poison' 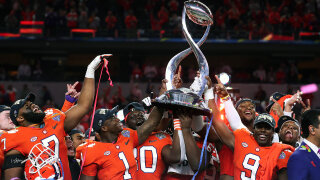 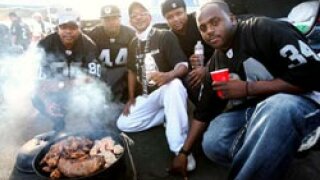