The Physics of Batting 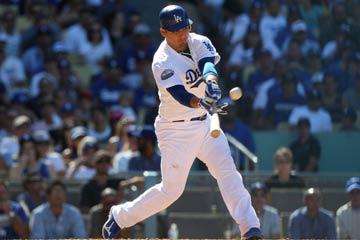 When a power hitter whacks a pitcher's fastball and knocks it into the upper deck, the actual amount of time that the ball comes in contact with the bat is just 0.7 milliseconds, according to Pennsylvania State University physicist Daniel A. Russell.

But while that game-changing event is brief, it's also filled with incredibly powerful and fast forces. Consider that a Major League baseball, which weighs a fraction more than 5 ounces (141 grams), typically is flying toward the plate at a speed of around 90 miles (144 kilometers) per hour. As the batter swings to meet it, his bat is moving even faster — about 110 miles (177 kilometers) per hour, in the opposite direction. In that 0.7 milliseconds in which the two meet, the ball is subjected to an average force of more than 4,000 pounds (1,870 kilograms) and a peak of more than twice that [source: Russell] . No wonder a video close-up of a ball striking a bat shows the ball being noticeably deformed, like the face of a boxer being punched. The bat deforms a little, too, flexing and compressing in response to the violent collision [source: Russell].

The result: The ball sails off into space—and if the batter gets his wish, into the cheap seats. But whether he trots across home plate in exultation, or walks back to the dugout in frustration after his harmless fly ball is caught, depends on a variety of factors. One important variable is whether he connects with the bat's so-called sweet spot — actually, a zone between roughly 4.5 and 6.5 inches (11.4 and 16.5 centimeters) from the end of the bat, in which the bat vibrates the least and transfers the most energy to the ball [source: Coburn].

Assuming that the batter accomplishes that, other variables come into play. How far a ball goes depends upon how quickly it sails off the bat, a measure that physicists call batted ball speed, or BBS, which is influenced by the bat's weight, but more so by the speed of the batter's swing. Against a 94-mile-per-hour (151-kilometer-per-hour) fastball, every mile-per-hour increase in bat speed adds 8 feet (2.4 meters) to the distance [source: Coburn].

Retired University of Arizona engineering professor Terry Bahill has found that the ideal bat for most major league hitters is in the 31-to-32-ounce (878 to 907 gram) range — about 20 ounces (566 grams) lighter than the hefty 54-ounce (1.5 kilogram) bat once used by Babe Ruth, the game's first great power hitter [sources: Coburn, Taube and Malta, Dewey]. Today's players need lighter bats to hit the greater variety of pitches thrown.