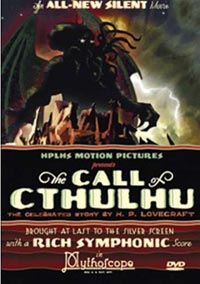 The H.P. Lovecraft Historical Society produced a silent film based on Lovecraft's "Call of Cthulhu."
Photo courtesy of Amazon.com

Cthulhu shows up in odd places, but one that isn't so bizarre is the role-playing game genre. In 1980, creators of the game Dungeons & Dragons included several creatures in the Cthulhu mythos in the resource guide called "Deities and Demigods." Unfortunately, they did so without knowing that Arkham Press, which owned the rights to Lovecraft's intellectual property, had already licensed the rights to Chaosium, Inc. Subsequent printings of the resource book excluded the Cthulhu mythos creatures.

Chaosium, however, went on to publish one of the most successful horror genre role-playing games ever. They called it "Call of Cthulhu," and designed a game rooted deeply in the Cthulhu mythos. Players assume the roles of normal people caught up in the nightmarish world of Lovecraft's imagination. Just like the characters in Lovecraft's stories, the best most characters can hope for is a quick death before they go completely insane. Characters must unravel mysteries knowing that just by gaining knowledge they put their own sanity at risk. A well-run game creates a sense of unease and paranoia among the players.

The "Call of Cthulhu" game is a pencil-and-paper role-playing game, meaning that each player has a character sheet that records what his character is capable of, what he's carrying and any other information necessary for the player to play. The arbiter of the game is called The Keeper, and he runs all the aspects of the game not directly controlled by the players. Together the Keeper and the players tell a story of terror and adventure.

There's also a video game called "Call of Cthulhu: Dark Corners of the Earth." In this game, you get a first-person perspective as you explore Lovecraft's universe, encountering otherworldly nightmares and fighting to survive. The Cthulhu mythos is a major influence in many other games as well, ranging from the serious ("The Lurking Horror") to the not-so-serious ("Discworld Noir").

If you go to any clothing store that caters to geeks, it's only a matter of time before you encounter a shirt that references Cthulhu. His ugly mug graces clothing, posters, comic books, bumper stickers and even toys. Something about this critter tickles the fancy.

Perhaps the fascination with Cthulhu is because part of us finds him to be a little silly, with his tentacle face and large wings, while another part of us feels that same cold, creeping dread Lovecraft seemed to communicate so well in his timeless stories. His appeal is both indefinable and undeniable. To that end: la, Ia, Cthulhu fhtagn. (Or, in human terms, "Cthulhu waits!")

For more information on Cthulhu and the Great Old Ones, check out the links below.

All I Have to Do is Dream

Dreams fascinated Lovecraft, as is evident in his extensive correspondence with his friends and fellow authors. Lovecraft claimed that many of his stories first occurred to him in a dream, including "The Call of Cthulhu" [source: "The Call of Cthulhu and Other Weird Stories"]. Lovecraft envisioned a space that you could enter while dreaming, and wrote several stories about characters who traveled to far distant locations through their dreams. Although these stories aren't directly connected to the Cthulhu mythos, dreams still play a very important role within that universe.