Cthulhu Oughtta Be in Pictures 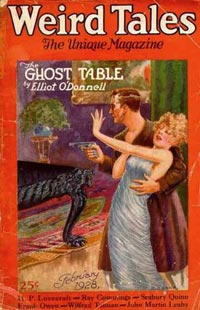 Lovecraft saw many of his stories, including "Call of Cthulhu," published in Weird Tales magazine.
Cover copyright © by Popular Fiction Publishing Co., Reprinted by permission of Weird Tales Ltd.

Cthulhu's popularity in film, television, comic books, games, musicals, songs and good old geek culture is astounding. Lovecraft managed to evoke an incredibly strong reaction in readers, particularly when you consider the fact that Cthulhu doesn't show up in very many Lovecraft stories. Maybe it's because Cthulhu is associated with the Earth, having been imprisoned here for thousands of years, or maybe his physical description taps into our primal senses of fear, disgust and fascination. Whatever the underlying reason, the result is that Cthulhu is a real Great Old One about town.

Cthulhu has clawed his way into an ever-growing subculture. When J.J. Abrams' sneak peek of his unnamed (as of press time) "1-18-08" film premiered in front of "The Transformers," Lovecraft fans immediately speculated that the destructive force was actually Cthulhu. As details slowly leak out, these fans have become ever hopeful that Cthulhu is, in fact, the monster in the film, despite statements from Abrams and others that the creature is an original concept created specifically for the film. Cthulhu fans point to the tiniest details as evidence supporting their theory, including the presence of an otherwise innocent-sounding "bloop" effect on one of the Web sites tied to the project.

That's how powerful Cthulhu really is -- he makes fans hope for a great translation to film even when the film's producer claims the movie isn't actually about Cthulhu. So far, the attempts to bring Cthulhu to the screen have met with mixed success. Actually, to be fair, they've mostly been met with ridicule and disgust by Lovecraft fans.

A few film festivals screened a movie simply titled "Cthulhu" in 2007, but reaction has been pretty negative across the board. A low-budget 2005 movie called "The Call of Cthulhu" attempts to bring the original Lovecraft story to life. The H.P. Lovecraft Historical Society produced the short film, which emulates the silent movies of the early days of cinema. Fan reaction has been mixed, and it seems that an appreciation of the silent film genre may be necessary to enjoy the movie.

The Cthulhu mythos also shows up in television shows. It seems that a lot of animators are big Lovecraft fans, as passing references to the Cthulhu mythos are in several cartoon series. You can catch characters talking about the "Necronomicon" in everything from "The Simpsons" to "The Grim Adventures of Billy and Mandy."

There's even a musical set in Lovecraft's universe. Long said to be impossible to stage, the musical "A Shoggoth on the Roof" features a cast of doomed humans and horrifying creatures as they sing and dance their way to the show's conclusion. The original libretto and soundtrack parodied the musical "Fiddler on the Roof," which is part of the reason it's so hard to stage (it comes down to music rights). The other big reason it's hard to stage is because it's difficult to create a mountainous monster who destroys the entire set every night.

In the next section, we'll look at how Cthulhu has clawed his way into other realms of pop culture.

Cthulhu gains mention in several other films, and the Cthulhu mythos goes even further. You can catch references to Lovecraft's creations in movies from the "Evil Dead" series to a "Friday the 13th" film. Other movies attempt to make a stronger connection to the mythology. Here are a few movies that either are adaptations of Lovecraft's work or heavily feature his creations: