The Real Cult of Cthulhu 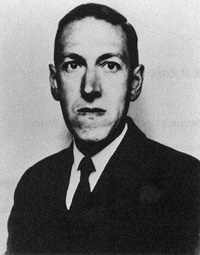 H.P. Lovecraft, creator of Cthulhu and other things that go bump in the night.
Photo courtesy of Arkham House Publishers

In Lovecraft's fiction, the various cults worshipping Cthulhu usually consist of primitive, or secluded groups of people who either believe that Cthulhu will usher in an era of chaos and uninhibited violence or that he will wipe out all humanity but will thoughtfully kill off the cult quickly and relatively painlessly. Either way, the return of Cthulhu for most people is thought of as a bad thing.

It sounds strange, but over the years there have been a few small "cults" that have actually formed around the Cthulhu mythos. Some of these cults combined Lovecraft's mythology with other beliefs, like Satanism, while others seem to accept that Cthulhu and his brethren are fictional, but subscribe to the philosophy that those fictional beings represent. There are also several Lovecraft fan organizations that use the term Cult of Cthulhu to describe their group, though they are more about celebrating works of fiction than promoting a particular world view.

As literary creations, Cthulhu and his ilk are less than a century old. It might seem odd that some people follow a religion based on a relatively young and reportedly fictional character. Some cult followers say their beliefs are supported by the "Necronomicon" and other books. Unfortunately for them, the "Necronomicon" is also one of Lovecraft's inventions. Several anonymous authors have written various hoax editions of the "Necronomicon."

One of these, often called the Simon edition for the pseudonym adopted by the author, says that Cthulhu comes from the Sumerian word Kutulu, seeming to give the cult of Cthulhu at least some historical legitimacy. Several researchers argue that Kutulu is not a proper Sumerian word at all and that "Simon" either created it or mistakenly used it to make Cthulhu seem like an ancient idea rather than the invention of a 20th century author.

Besides the multiple hoax "Necronomicon" editions, authors have created other books supporting the belief that the Cthulhu mythos isn't just a literary device. Darrick Dishaw, a personality in Lovecraft fandom, wrote his own Cult of Cthulhu Bible, mixing elements of the Mythos with Satanism and other philosophies. Critics allege that Dishaw at best wrote a disjointed book with conflicting ideas and at worst plagiarized material found elsewhere by other authors (mostly on Wikipedia). Dishaw responded to his critics with the claim that the material found elsewhere was, in fact, his own work.

Among those who acknowledge the fictitious nature of the Cthulhu mythos, there are those who follow the philosophy lying behind the fiction. Their view is that the extraterrestrial creatures in Lovecraft's stories are so cosmic in scope that humanity is beneath their notice. The creatures aren't so much malevolent as uncaring and uninterested. As humans, we are tiny in comparison -- these beings would view us as nothing more than a flea. To these people, the creatures represent cosmic and natural forces that have no minds of their own, yet can affect humanity even to the point of destruction. They hold the world view that mankind is an insignificant part of the universe, and that no matter what we might do, there are forces beyond our control or understanding that could wipe us out in an instant.

In the next section, we'll look at Cthulhu in geek culture.