by the Editors of Publications International, Ltd. & Denise Harrison
Prev NEXT
11 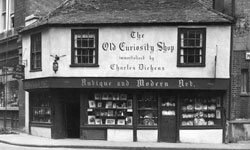 Though the name sounds a little on the sinister side, this character isn't a villain. In fact, he's nearly the victim of manipulation by his friend, Fred. Fred believes his sister, Nelly, will receive a substantial inheritance and tries to persuade Swiveller to marry Nelly so that Fred can get his hands on the money. Swiveller, however, thinks the 14-year-old Nelly is too young to marry. Fred asks him to wait a few years and then marry her, but Swiveller instead falls for a servant girl. Swiveller winds up with good fortune after all, when he's the beneficiary of an inheritance, helps the servant girl with her education and later marries her.