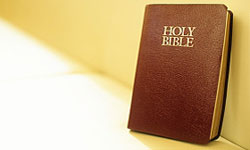 The Bible is easily one of the best-selling books of all time, but exact sales numbers are hard to nail down.
Stockbyte/Getty Images

Scholars can debate endlessly over which book is the "best" of all time, but finding out which ones have enjoyed the most commercial success should be a more concrete endeavor. We can just look at the sales numbers and rank them. Unfortunately, this turns out to be quite a challenge itself.

There is no central repository for total sales numbers for books. Publishers may not share sales numbers for individual books, or their reported numbers may be inaccurate (they seem prone to creative exaggeration, particularly when a movie version of the book is coming out soon). It gets even worse when you consider that many books are put out in multiple editions over the years, often by entirely different publishers. Older works that are in the public domain might be published simultaneously by several different publishers. The fact is, any worldwide sales figures for a book more than a few years old are educated guesses at best.

These problems are compounded when you consider religious texts like the Bible, the Quran, and the Book of Mormon. Not only are sales numbers impossible to verify, but these types of books are often given out to followers or handed out in public places. Even if you could somehow pin down the number of copies actually sold, the books are required reading for adherents of some of the world's largest religions. Comparing their sales numbers to the works of Dickens or Rowling is like comparing apples to oranges. Therefore, these books, along with "Quotations from Mao Zedong" (which has the same issues with computing sales numbers as the others, although it is not a religious text) have been excluded from this list. For the record, the excluded books have sold an estimated hundreds of millions of copies each (several billion, in the Bible's case) and would have taken most of the top positions on the list.

With all those caveats in mind (and not including e-book sales), here are the 21 best-selling books of all time, as far as we can tell.