Noon: Rest from Work (After Millet) by Vincent van Gogh 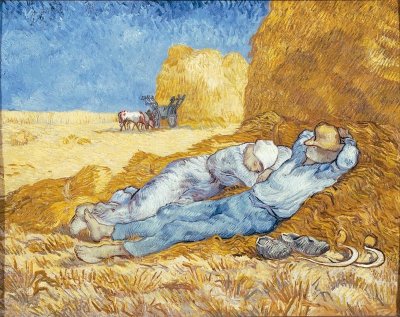 Vincent van Gogh completed Noon: Rest from Work (After Millet) after several bouts with epilepsy. Vincent suffered a severe attack in December, but his recovery was rapid. Two more attacks followed in January and February requiring an extended convalescence. When van Gogh was able to paint, he again turned to the works of Millet to find consolation. The clear pure hues of blue and yellow in Noon: Rest from Work (After Millet), as well as the thick application of paint, reveal no diminishment of van Gogh's power or of his identification with the honesty of agricultural toil.

On the next page, we'll see another example of Vincent van Gogh's reliance on older masterworks to find inspiration in his own art.