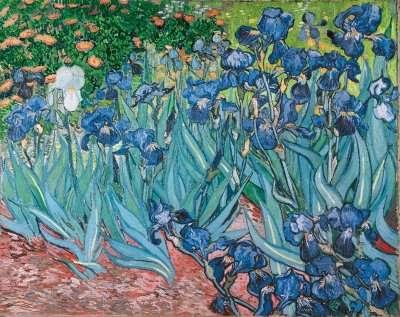 Irises was one of the paintings Vincent van Gogh  depicting the grounds of the asylum in Saint-Rémy. See more pictures of van Gogh's paintings.

Unable to live securely on his own in Arles, Vincent voluntarily entered Saint-Paul-de-Mausole, a psychiatric asylum in nearby Saint-Rémy-de-Provence. When Vincent entered the asylum on May 8, 1889, his condition was diagnosed as a form of epilepsy. As long as he remained stable, the doctors allowed Vincent to paint, though for the first weeks of his residence, he was confined to the hospital for supervision.

By mid-June, he was permitted to paint in the fields surrounding Saint-Rémy in the company of an attendant. In his letters to his brother Theo, van Gogh was eager for news of the art world in Paris. Isolated from the energetic exchange of ideas that he had experienced in Paris, as well as when living with Gauguin, Vincent reflected upon artists and writers who articulated a deep understanding of current human conditions. It was Vincent's hope that his own art could do the same.

In July, while painting in the fields on the outskirts of Saint-Rémy, Vincent van Gogh suffered a severe seizure that left him debilitated for more than five weeks. He complained to Theo that he felt "like a fool going and asking doctors permission to make pictures," but he fully grasped the seriousness of his condition, realizing that "a more violent attack may forever destroy my power to paint." With a lack of models, he returned to the practice of copying reproductions; in them, he revived the spirit of consolation and solace he had found before in nature.

Follow the links below to learn more about some of the most famous works Vincent van Gogh painted during his time in Saint-Rémy.

Cypresses: Cypresses, by Vincent van Gogh, depicts a grove of trees just outside the asylum where van Gogh stayed in 1889. Read about van Gogh's Cypresses, which reminded Vincent of his famous sunflowers.

Self-Portrait: This 1889 Self-Portrait is one of the last of the many self-depictions van Gogh painted. Read about van Gogh's Self-Portrait, noted by critics for its intense emotion.

Lilacs: Lilacs, by Vincent van Gogh, was completed in 1889, after van Gogh checked himself into an asylum for treatment of his seizures. Learn about van Gogh's Lilacs, painted on the grounds of the Saint-Paul-de-Mausole mental asylum.

The Bedroom: Vincent van Gogh's The Bedroom is a recreation of the painting by the same name that van Gogh painted while living in the Yellow House. Read about The Bedroom, which shows the artist's nostalgia for his life in Arles.

On the next page, we'll look at one of Vincent van Gogh's most recognizable paintings.